Some of her words were probably Southern regionalisms rather than teenage slang. She called a baked potato dish a "potato pone."
By fall she was complaining about the price of cotton.
"Former bit calicoes are now 20 and 25 cents...What will the people do?" 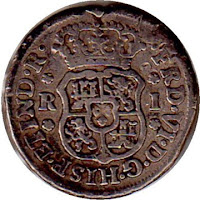 Mid-19th-century Americans used
Spanish coins like this "bit" as currency.
Twenty-five cents is two-bits, so the price of prints had doubled. Like most teenagers, she found "pretty dresses" a major concern:

"Remained sewing until 2 ½ when I proceeded to adorn my person. Wore my new dress with which I am in love."

"After School I came directly home. Ma was down stairs sewing....F. came.... The pretty ladies [she] had seen had made her quite envious particularly of their toilettes & she cautioned me not to go on Canal St. for I would see too much grand dressing for my own comfort. Innocent child! How often have I returned home almost downhearted at the remembrance of the pretty dresses & faces I had seen." 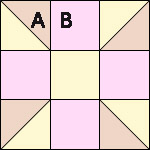 Cutting an 8" Finished Block
These measurements will give you pieces a bit large which you can then trim to an 8-1/2" square (8" finished) block.
A Cut 2 medium and 2 light squares 3-5/8". Cut each in half diagonally. 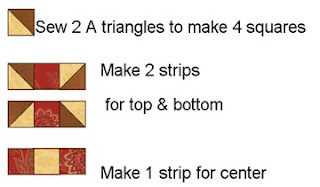 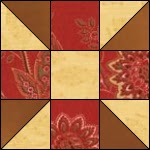 Clara's diary was recently published as The Civil War Diary of Clara Solomon: Growing up in New Orleans, 1861-1862, edited by Elliott Ashkenazi (Louisiana State University Press, 1995). Read excerpts from the book by clicking on this webpage and scrolling to the bottom of the page:
http://dragoon1st.tripod.com/cw/files/look_solomon.html 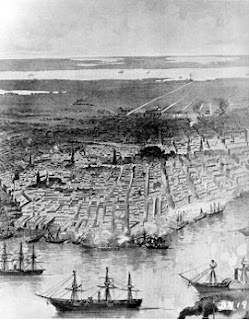 New Orleans became a Union-occupied city for most of the War.
Posted by Barbara Brackman at 6:00 AM

I really enjoy your posts...reading diaries from this time period give a much different viewpoint of the war than school textbooks.

Interesting post and nice block. I've completed the block and have posted it along with a how-to on my blog.

it's done..before I start my holidays in Paris!

Interesting post. For your readers info, the new Civil War Museum in Kenosha, WIsconsin has a special exhibit of women's dresses from 1860-1880's. They WERE pretty. Exhibit goes through August.

OH dear...I couldn't get this one to come out to the same size as my other blocks...don't know what I did wrong?