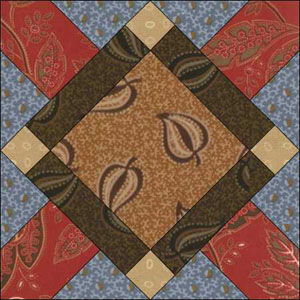 Fort Sumter
The Fort Sumter block was given that name in the Chicago Tribune's quilt column in the 1930s. 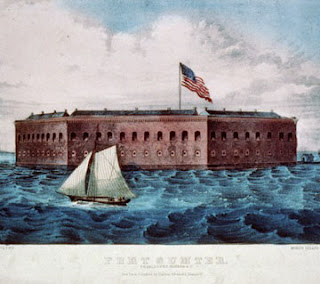 In 150 years ago this week,  Mary Chestnut's husband was negotiating with the Yankees before the Confederate bombardment of the Union fort in Charleston's harbor.


"His interview with Colonel Anderson [Federal commander at the Fort] had been deeply interesting, but Mr. Chesnut was not inclined to be communicative. He wanted his dinner. He felt for and had telegraphed to President [Jefferson] Davis for instructions—what answer to give , etc. He has now gone back to with additional instructions…. 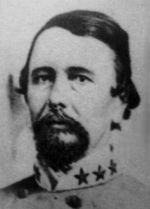 
I do not pretend to go to sleep. How can I? If does not accept terms at four, the orders are, he shall be fired upon. I count four, St. Michael's bells chime out and I begin to hope. At half-past four the heavy booming of a cannon. I sprang out of bed, and on my knees prostrate I prayed as I never prayed before. 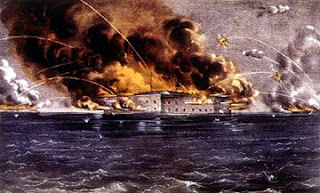 There was a sound of stir all over the house, pattering of feet in the corridors. All seemed hurrying one way. I put on my double-gown and a shawl and went, too. It was to the housetop. The shells were bursting. In the dark I heard a man say, 'Waste of ammunition.' I knew my husband was rowing about in a boat somewhere in that dark bay, and that the shells were roofing it over, bursting toward the fort." 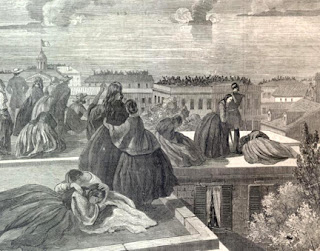 Mary watched the battle from the
roof of her house in Charleston,
a scene pictured in Harper's Weekly, May 4, 1861 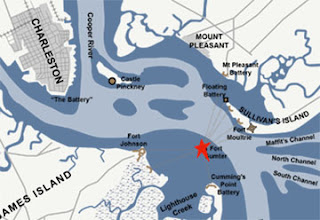 Fort Sumter guarded Charleston's harbor. This map adapted from Wikipedia shows the bombardment that Mary Chesnut witnessed. The Fort (the red star) was fired upon from points on land north, east and west. 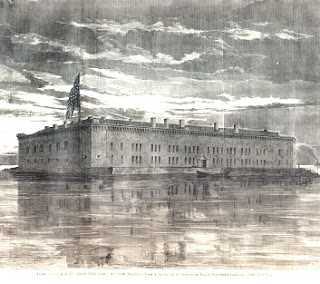 The Fort before the shelling.
Picture from Harper's Weekly, April, 1861.
The quilt block, named by the fictional Nancy Cabot who wrote the quilt column for the Chicago Tribune in the 1930s, seems to symbolize the Fort in the harbor. The central nine-patch can stand for the building. The blue triangles around it can stand for the water in the harbor. 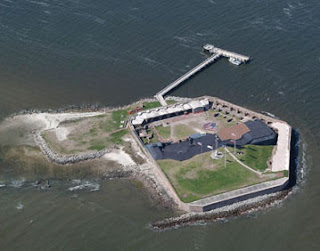 In actuality the Fort is a five-sided structure.
The red shapes in the corners can symbolize the lines of fire from the shore. 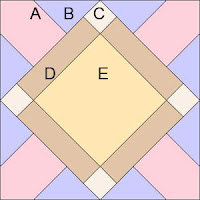 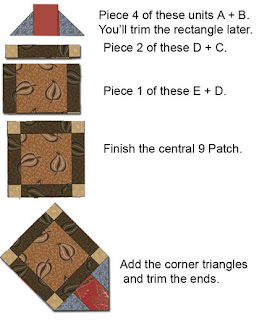 The block has two variations, found as number 2423 or 2461 in BlockBase. Another name is Four Points. 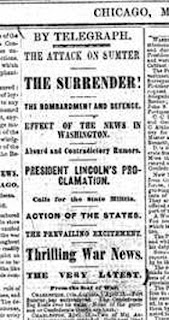 An account of the the week's news
in the Chicago Tribune, April, 1861

Mary's portrait from her book
Witness the War from Mary Chesnut's point of view by downloading her diary or adding this site to your favorites:
http://docsouth.unc.edu/southlit/chesnut/maryches.html
You can check it every week to get her perspective as a Confederate government insider who is perceptive enough to foresee the horrors ahead.
LAST MINUTE UPDATE 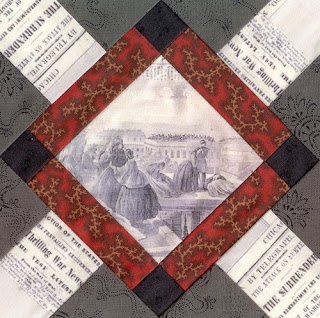 Fort Sumter by "Sewprimitive"
"Sewprimitive" posted this block early this morning on the Flickr group. She copied the pictures above onto fabric and created the Fort Sumter block out of the period graphics. Very clever!
Posted by Barbara Brackman at 6:00 AM

I'm enjoying following the history of the war this way, thinking about what was happening there in the spring, comparing it to today. This is a great block, and I love what sewprimitive did with printing her fabric. Thank you for the work you put into this.

I just discovered your blog and Civil War project and am completely captivated, blown away and excited about the prospects for the entire year!! Today I begin with block 1 and hope to catch up by June 1st.

For others interested in the Civil War, I picked up a Time Magazine publication commemorating the War at Costco today. Haven't had a chance to read it, but it looks like it will tie in with Barbara's blocks very nicely.

Thank you for all the work and caring you put into this project. Dare I ask if it will eventually turn into a book?

Thanks Barbara for another great block. So excited myself to read Bonnie's comment. How fun would that be for Bonnie to catch up. Hope you join flickr group Bonnie so we can see you blocks - Hugs Nat

I, too, am beginning the Civil War BOW. I do have block #1 finished and hope to get caught up soon. I have been lurking around on this blog every since the BOW began and after I couldn't stand it any longer, I knew I wouldn't be satisfied with myself unless I made them too. So I'm in the pool with everyone else. Barbara, I really appreciate all the work that you are doing in presenting this to us and want you to know it! So, thank you so much..I love Civil War history and the stories you post make this project even more special.

Fascinating information to go along with the block as usual. I have completed my block and have posted it on my blog along with a how-to.

I showed this block to my husband and his first comment was that it was appropriate for the Fort to be siting on the Confederate Flag. Another hidden meaning in a block.

Thank you for showing my block, Barbara!

I was amaze when I saw the precise workmanship of every one on the Flickr group. This seems lovely blocks to use my old prints and compare my workmanship with the others!

I will be your frequent visitor, that's for sure. pain relief Read a useful article about tramadol tramadol