Texas Tears
by Becky Brown
Texas Tears is a variation of a quilt block printed about 1890 by the Ladies' Art Company, a St. Louis pattern source. We can use it to remember Sam Houston. 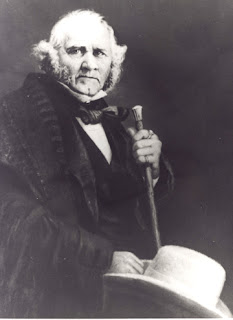 Sam Houston wearing his broad-brimmed hat
and serape in the early 1860s
Sam Houston was Governor of both Tennessee and Texas. He was also president of the Texas Republic and a Senator from the state. A natural leader, proud and independent, tall and outrageously dressed, Houston defined the mythical Texan. He was well known for wearing a broad-brimmed hat at a time when top hats were the fashion. He wore a Mexican serape as an overcoat and a vest of wildcat fur. A Washington woman remembered him in the U.S. Senate: "a rather unusual sight, ...a large man, so large that he was called the 'big Texan.' He was always whittling [on the Senate floor]." 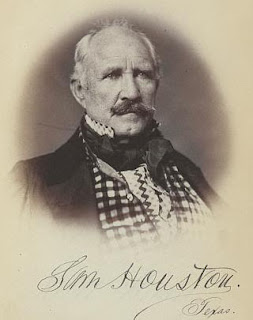 Houston in one of his more conservative vests,
1859
Houston was a slave owner but he opposed the slave states seceding from the Union, threats that so-called "fire-eaters" had been using to hold the Federal Government political hostage for decades. As threats grew louder, Houston successfully ran for Governor on a Union platform. When Southern states played their secession card in early 1861, he refused to permit Texas to join the Confederacy and was forced out of office. 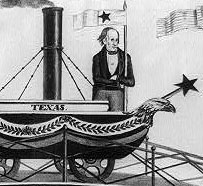 Realizing the influence Houston could muster, President Lincoln asked him to lead Union troops against a Confederate Texas, but Houston rejected the offer. Opposed to a War he knew the South could not win, he also refused to wear the Confederate uniform. Houston was a Southern politician with a realistic vision of the costs of war, a man who acted according to his conscience rather than the public consensus. 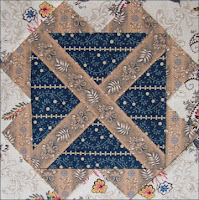 Becky's block uses the fashionable buff and blue color combination.
She said she didn't notice the T's until she photographed it. 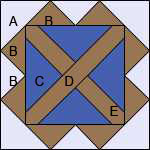 Cutting Instructions for an 8" Finished Block

Like most of the patterns here I found this one in BlockBase, the digital version of my Encyclopedia of Pieced Quilt Patterns. I used the keyword search and typed in Texas. I found many ideas, but this one seemed to capture Sam Houston's Civil War experience the best. You can also find the block by its pattern number 3261.
This story is from a 2006 Block of the Month I did called Civil War Heroes. It's out of print. 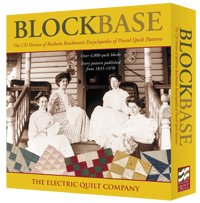 Read more about BlockBase by clicking here:
http://www.electricquilt.com/Shop/BlockBase/BlockBase.asp
Posted by Barbara Brackman at 8:10 AM

This is an interesting block...thanks Barbara!

Love this! Sam Houston what a guy! We focus on the actively involvedsouthern state an forget about Texas.

YEA, I have Blockbase! Thanks for the tip. Cutting the 7/16" can be tricky.

What great bits of information Barbara- I love reading this blog just for the stories. Sam Houston sounds like quite the guy. It is refreshing to read about someone who stood by his values and beliefs no matter what the political price. Thanks for sharing.
Anna

whew! this one was a little tough for me, but got color and points right on the second go round.

I have made a lot of blocks, I also have block base but I don't think I have ever seen this one, it almost looks three-dimensional. Off to my sewing machine.

Love reading the history...makes the blocks more interesting ..they say everything is big in Texas, looks like Sam Houston lived up to that..

I have blockbase on my old laptop...need to go dust that one off again! Also, just read through the "civil war scrapbag" on your sidebar...now I want to have a bit of each style of fabric in the quilt!

Did you know that block at the top is slightly different that then one by Becky and the line drawing? (The fabric that forms an X in the center extends beyond, and the triangles around the edges are kind of "nipped in one corner.")

I'm kind of hoping that the measurements are right for the lower block rather than the upper one, since I didn't catch that until I had already cut my fabric!

These are fun, though I'm still working on the applique one (I'm a very slow appliquer.

Love the block, thank you for posting these!

A.G. is right. I'll fix it now. The measurements are for the one Becky did. She's my test-stitcher.

I've completed my block and posted a how-to for new quilters on my blog.

Thanks for the block, got all done except finishing the applique block, thanks fo doing this,really enjoy and can't wait for the next on. Connie

Great fun, and I am keeping up! Would I step back in time to shop at mercentile...yes I would! ~donna

a nice block..but a little tricky to sew in on 4".but now it is done!