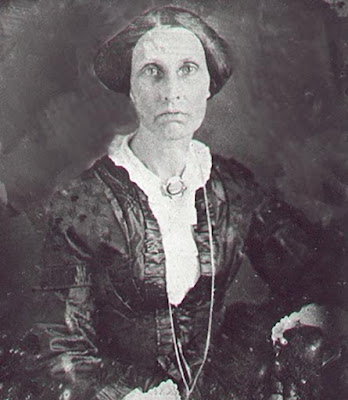 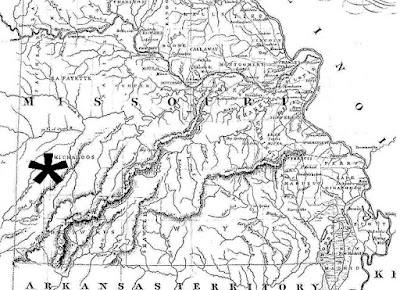 Kickapoo land in southeastern Missouri. The indigenous people often returned
to visit the graves of the dead.
John had acquired land from the Kickapoo people who had come from Illinois, settled for a short time near what is now Springfield and moved on. John's brother-in-law's family came to the new slave state with them, bringing six enslaved people. Louisa, about 20 when she became a Missourian, gave birth to nine more children in Springfield, a town her husband founded and where he prospered by selling lots. 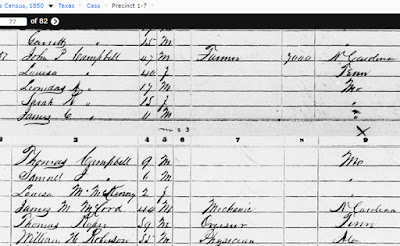 John seems to have been rather restless. In the mid 1840s he took the family to Cass County, Texas, claiming land grabbed from the Caddo tribe and later Mexico in the northeastern part of the new slave state. 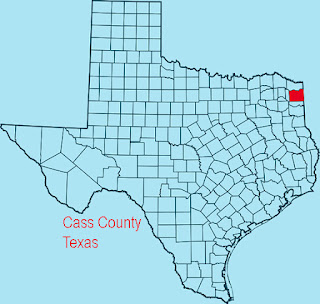 It must have been Louisa who insisted they move back to Springfield
where they commissioned an imposing house finished in 1851.
. 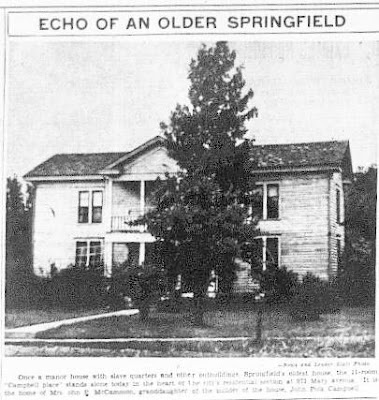 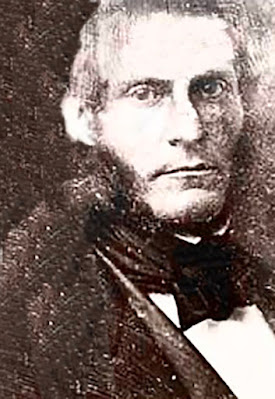 John Polk Campbell (1804-1853)
John died in the Cherokee Nation (now Oklahoma) in 1853 where he is buried, although he has a stone in Springfield too.
When the Civil War commenced Louisa's children were mostly grown. Sons and nephews enlisted as Confederate soldiers. She was raising two younger children, son William about 9, an infant when his father died, and granddaughter Louisa Cheairs McKenny, 12. The younger Louisa's mother, Tennessee-born Talitha, did not survive Lulu's birth. Lulu never knew another "Mother" as she called her grandmother. 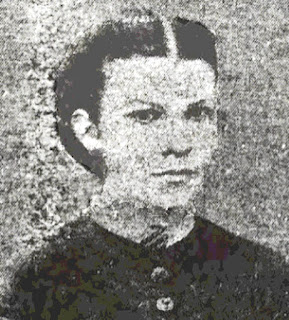 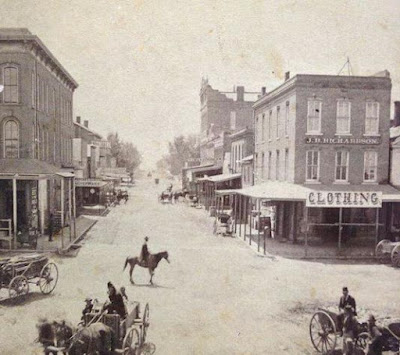 Springfield in 1870
Louisa's nephew Captain Leonidas S. (Dick) Campbell headed a regiment victorious in the early battle at Wilson's Creek and his company occupied Springfield soon after. They were driven out by Union troops under Colonel Franz Sigel who took over Springfield, rounding up southern sympathizers like the Campbells who were required to swear an oath of allegiance to the Union. Louisa Campbell's family recalled she preferred to leave town rather than "take the oath" and so began her wanderings throughout the south.

German-born troops under Sigel reflect the urban/rural divisions.
Their Springfield house became a hospital for wounded soldiers. "There were cots and pallets everywhere filled with Union and Confederate men," recalled Lulu. Louisa and her two youngest went to Helena, Arkansas taking many of their slaves from Springfield. Lulu recalled the enslaved Missourians living "in a big stockaded yard with cabins along one side. They seemed dazed and apathetic, and apparently did not realize what was happening." Lulu's nursemaid said a final goodbye and handed her a roll of bills for Lulu's trip to Mississippi where an uncle's plantation might offer refuge.

"My grandmother thought...sending us to Mississippi [would] get us far away from the fighting  [but] brought us into close proximity to Grant's [army attacking Vicksburg.]

And so after two years in Mississippi braving floods, typhoid and Grant, the Campbells went west again. Will, Lulu and Louisa were captured by Union soldiers and held for a short while in Arkansas.
Their destination was Texas and the home of Lulu's father Elnathan Durkee McKenny (McKinney). The elder Louisa delivered Lulu to acquaint her with her father and his new wife. Lulu recalled she behaved so badly she soon got her way and was back with "Mother" in Arkansas, where they made do with basic shortages. 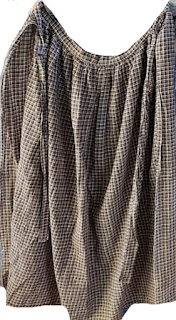 Blue and white home-woven check in an apron

"We had not cloth of any kind, except our homespuns. I learned to weave and was very proud of my neat blue and white checked dresses."

When Louisa's sons in various Southern states requested her assistance in camp and hospital she traveled to help on horseback with Link, her enslaved companion.

'"The Army in Arkansas was in terrible shape. Their most crying need was for quinine, for nearly all of them had malaria. Mother made up her mind that she was the person to get medicines."

She and Link rode to St. Louis where son Junius lived. "The only Union man in the clan" helped her buy the drugs which she then had quilted into her petticoat. 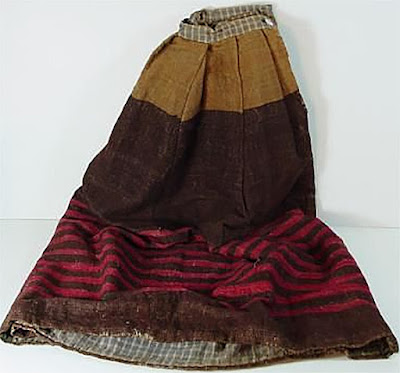 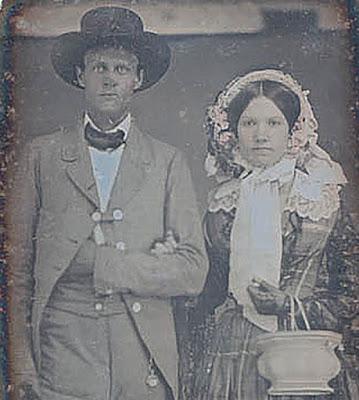 The History Museum on the Square
Two of Louisa's sons died in the war and two came home. Leonidas A. Campbell, above with sister Sarah Rush Campbell, survived. In 1864 Louisa and Link set off to tend to "Lonnie" in Camden, Arkansas.

"Before she left, all the relatives had the usual sewing and knitting 'bee' to provide as much as she and Link could carry with them for the soldiers," remembered Lulu in her memoir of her grandmother and the war.

When the war was over Louisa took Lulu to St. Louis and a Catholic boarding school. Louisa, in her fifties, returned to Springfield and her once-beautiful house---a hospital, and orphanage--- now "overrun with all sorts of riff-raff who had dribbled into town...and taken possession." Union-sympathizing friends had paid the taxes while Louisa was roaming the south, but "Everything was in a fearful state of dirt and disrepair." Louisa lived in the former slave quarters, "a poor, little house."
In May, 1866 Louisa caught pneumonia and died, much to her granddaughter's sorrow. About 25 years later Lulu wrote a memoir of the war and her "mother:" A Confederate Girlhood by Louisa Cheairs McKenny Sheppard.
Read the first publication from 1892 in the collection of the History Museum for Springfield Greene County here:
https://mdh.contentdm.oclc.org/digital/collection/mack/id/883
The memoir is also included in the 2020 compilation Confederate Girlhoods: A Women's History of Early Springfield, Missouri edited by Craig A. Meyer
Louisa's grave: https://www.findagrave.com/memorial/35025203/louisa-terrell-campbell
Louisa's husband's Indian Territory grave:
https://www.findagrave.com/memorial/166519414/john-p-campbell 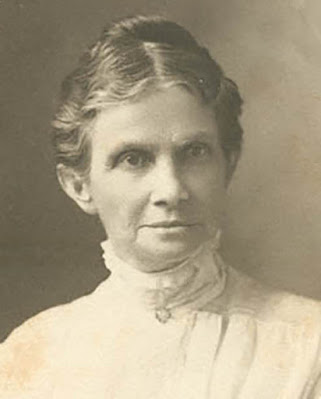 Lulu about the time of her memoir
Lulu's grave in Florida:
https://www.findagrave.com/memorial/68373156/lulu-cheairs-sheppard
Posted by Barbara Brackman at 6:00 AM

Strong women!! But, you had to be.