Confederate Bed-Clothes Fit for the Flames

Frances Dallam Peter (1843-1864) and her parents
Frances Paca Dallam &  Robert Peter in the mid 1840s.
The girl had epilepsy, an untreatable and mysterious condition at the time. 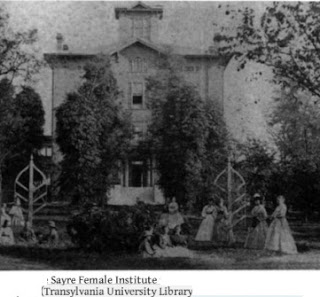 Despite her seizures Frances attended the Sayre Female Institute in
Lexington, Kentucky, founded in 1854.
When the war began she was about 18, living with her well-to-do family. Her father Dr. Robert Peter was a surgeon and administrator for the Union military hospitals in Lexington, a city with both Confederate and Union sympathizers. She kept a diary in 1862 and '63 giving us a young Union woman's view of the conflicted city. 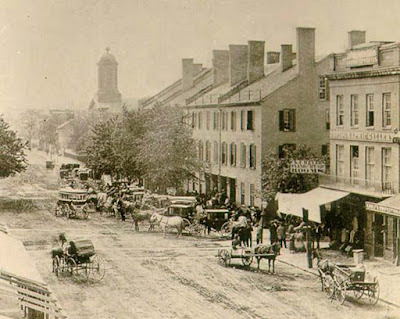 Lexington before the war
Neighbors became estranged as the town formed two rival factions, each awaiting deliverance by their respective armies who traded control over the war.
In the first year of the war she mentions sewing for Union soldiers at the Aid Society that met at the Wheeler & Wilson [sewing] machine shop at #5 Higgins Block. 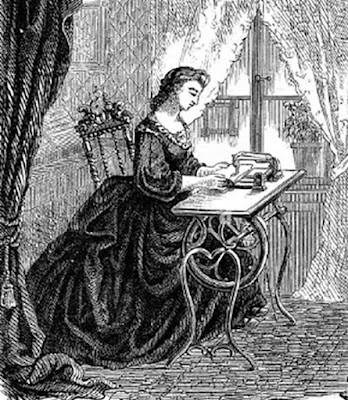 Sewing on a Wheeler & Wilson machine

Lexington's "secesh ladies" also had a sewing society to aid Confederate prisoners jailed in town. They likely made and donated bedclothes for the prisoners and hospital patients. 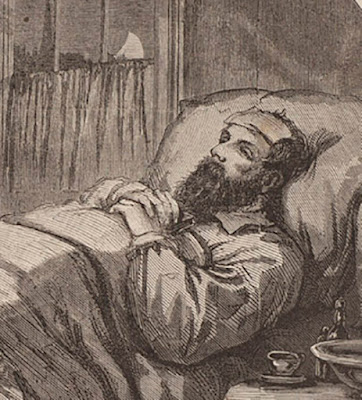 After the Southerners abandoned a hospital in a commandeered school building Frances, continually appalled by the Confederate Army's standards of cleanliness, had gossip about how horribly dirty the building was. "The bed clothes, etc. used by the rebels (which by the way belonged to the Aid Society) will never again be fit for any thing but the flames." We can guess that most of the quilts serving in hospitals managed by either side were shortly considered "fit only for the flames," which is why we have so few surviving from either side.
Frances's seizures proved fatal. She died in the summer of 1864 when she was just 21. Read selections from her diary in A Union Woman in Civil War Kentucky,  edited by John David Smith & William Cooper Jr.
https://www.google.com/books/edition/A_Union_Woman_in_Civil_War_Kentucky/7twPEAAAQBAJ?hl=en&gbpv=1&dq=a+union+woman+in+civil+war+kentucky&printsec=frontcover
Posted by Barbara Brackman at 6:00 AM

Besides the quilts' poor conditions, not to mention who knows what nasty infectious stuff got soaked into them, I have to wonder if many were burned simply due to not wanting to keep bad memories or juju alive. A spiritual as well as physical cleansing.