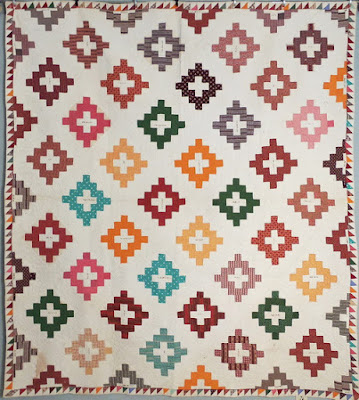 Quilts in this album pattern were often made for Civil War
soldiers in hospitals; a couple like this came from Green Bay, Wisconsin. 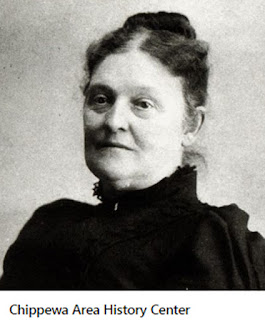 Flora Beall Outhwaite Ginty (1839-1907)
Flora Ginty was a new bride in the first months of the Civil War. Born in Cooperstown, New York, she moved with her family to Green Bay as a child. At about 20 she married George Clay Ginty, a Canadian newspaper man who founded the Oconto Pioneer in 1859. Oconto is about 30 miles north of Green Bay. 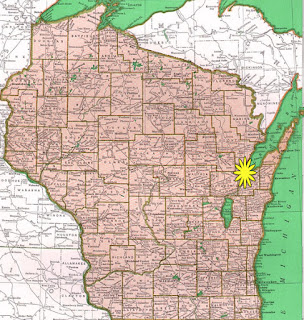 Green Bay is the yellow star
George spent a year in the Wisconsin Legislature. At 24 he enlisted in the 39th Wisconsin Infantry in 1864 and re-enlisted in the 47th during the war's last year. 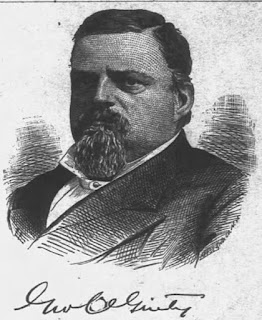 Major George Clay Ginty, later General Ginty (1840-1890)
Flora gave birth to two daughters Fannie and Bessie during the war. In her early twenties she volunteered at the local Sanitary Commission where she inscribed verses on blocks for quilts to be sent to the soldiers. Flora was a writer and became a journalist and editor herself. Her writing skills (both poetic and her script) must have impressed the older ladies in town. 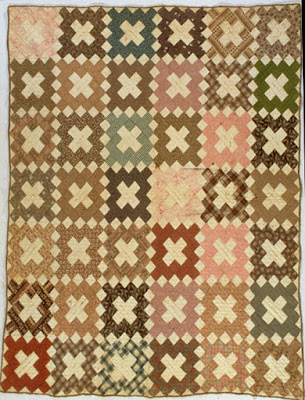 "Many 'Album quilts' (as they were called) were sent out..."
Is Flora talking about quilts like this one dated 1862
in the Iowa State Historical Society, Mary Barton Collection?
She recalled the days of the local Soldier's Aid.

"[The first album quilt] was the inspiration of dear, sainted Mrs. Daniel Butler.... I wrote on my block one afternoon in my little old house on the four corners and 'Aunt Kitty' Follett sat by my side as I penned the lines. I had seen the other blocks and said, 'I  am afraid Mrs. Butler will not think my verse dignified enough,' as most of the other verses were quotations from the Bible, but 'Aunt Kitty' said ---'oh! give them something to cheer them up, they need not all be dignified.' " 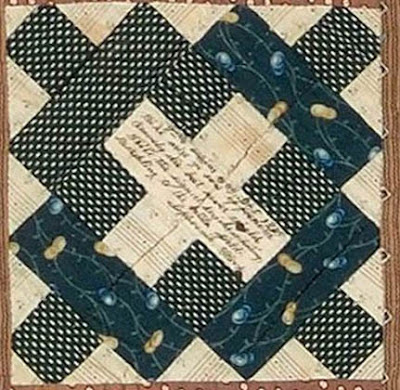 "One afternoon during the last year of the war I went into the sanitary[Commission] meeting at the residence of Mrs. H.S. Baird, whose doors were open always for the work and the flag raised on a staff in the yard told the regular meeting day, each week." 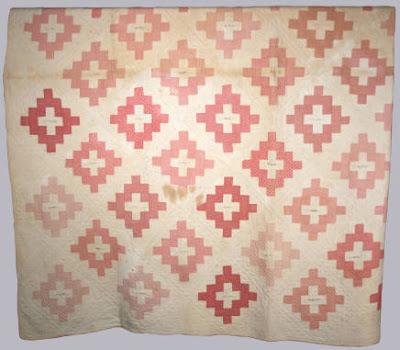 Quilt made in southern Wisconsin.
The inked inscription: "Made by the members of the Young Ladies
Soldiers Aid Society Hazel Green, Wis. 1864."
The "dignified dames" must have appreciated her first verse and told her: " 'If you will take these blocks home and write a verse in each one, you may sign any of the ladies' names to them that belong to the Sanitary Society,' 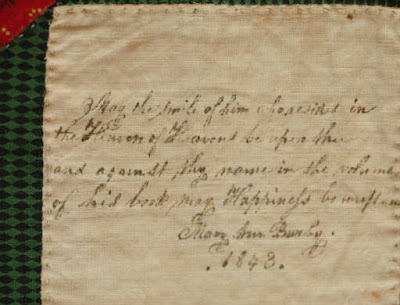 "I said I would do my best, at the same time thinking it would not be my fault if some of these dignified dames did not receive a tender missive from some 'bold soldier boy.' "

One of her verses:

Sweet be your dreams
Beneath this quilt,
Of Home may it remind you---
"God & Our Country"
Peace & love,
And the "girl you left behind you."

Flora signed the older ladies names to her saucy verses... "Did any of these matrons receive tender missives?" 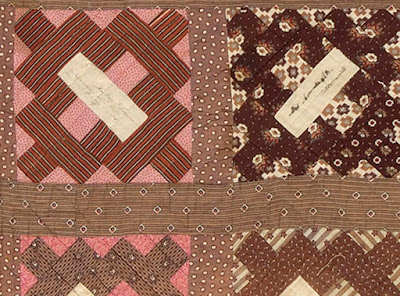 New York album dated 1865
Apparently so but Flora and Lydia Ellis conspired to keep the matrons unaware that "some unknown admirers that had rested under the quilt [intended to come] up north to storm our hearts." They also discouraged those soldiers from personally thanking the women who'd written the (flirtatious?) verses.
On another of their album quilts she wrote:
If rebels attack you, do run with this quilt.
And safe to some fortress convey it;
For o'er the gaunt body of some old secesh
We did not intend to display it.
Flora's short memoir for the Green Bay Press-Gazette in 1887 is a glimpse of one group's method for signing their donations to the Sanitary Commission (probably not followed by less daring matrons.) Amazingly enough one of their quilts did come back to Green Bay. 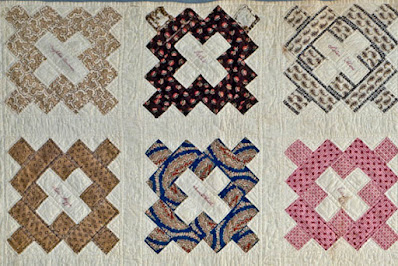 Album quilt dated 1864 made for Mary Elizabeth Hitchcock Seamans,
possibly in Wisconsin
https://americanhistory.si.edu/collections/search/object/nmah_556437
In December, 1886 C.N. Remington of Stevens Point shipped a quilt to J.M. Schoemaker , commander of the T.O. Howe Post of the Green Bay GAR. Or rather he sent parts of a worn quilt "that the ladies of Green Bay sent to the boys in blue in Dixie."
In 1884 he'd made a nostalgic trip to North Carolina to visit the Bentonville battlefield where his regiment the 13th Michigan Volunteer Infantry had fought in the last days of the war. In the home of North Carolinians who'd once been slaves he came across the fragment of a quilt that he guessed had been given them by a Union soldier.  Only 8 inked blocks remained. He brought the pieces home and "Mrs. R said I ought to send them to you."
The quilt was featured in an article in Flora's husband's paper the Star-Gazette and she wrote a letter to the editor with the memories above. 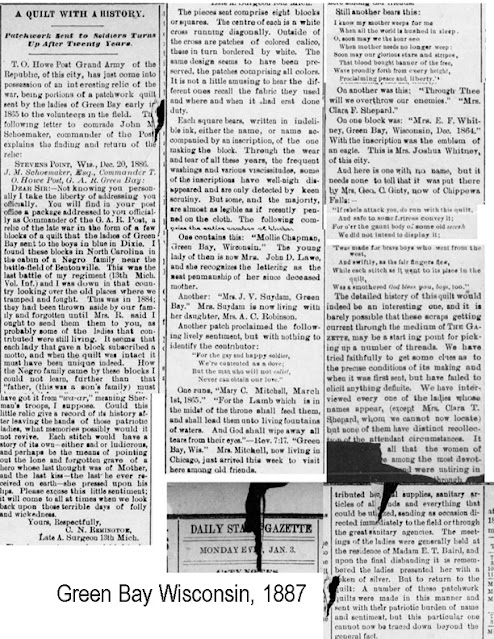 The first story about the quilt 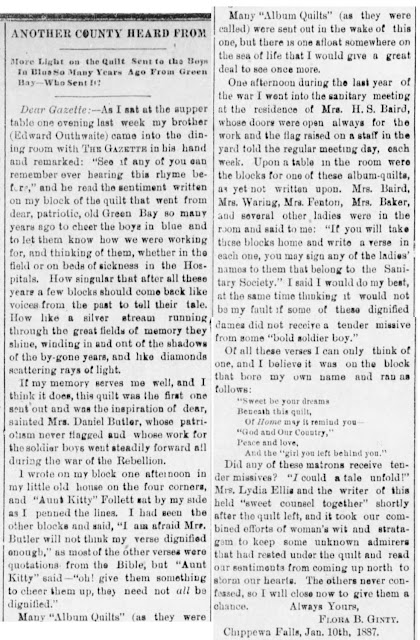 The second article about the quilt by Flora
Where those blocks are now is a mystery.
Flora was quite a writer and journalist, taking over the paper for a year or so after her husband died. She had three children, the most remarkable of whom was Elizabeth Ginty who moved to New York to become a playwright, producer and long-time unmarried companion of famous producer David Belasco in the early 20th century. 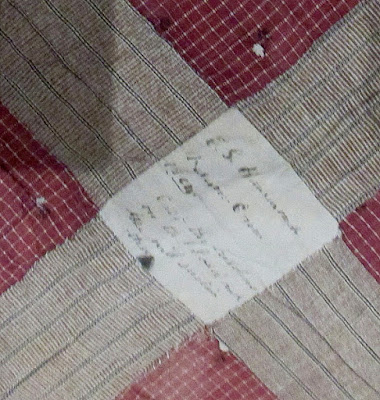 Collection of the Lincoln Shrine Museum
Signatures on this New England Sanitary Commission quilt
led the soldier who received it to visit the signer and marry her sister. This is not the
only example of a matchmaking quilt.
We'll digress into the life of Elizabeth Baird who hosted the weekly Sanitary Commission Meetings next week.
Posted by Barbara Brackman at 6:00 AM