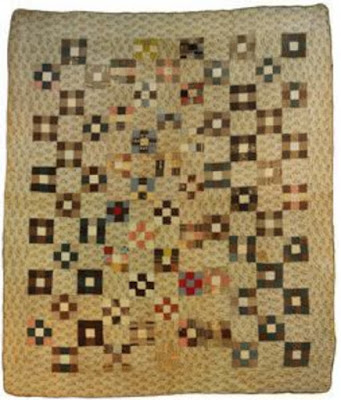 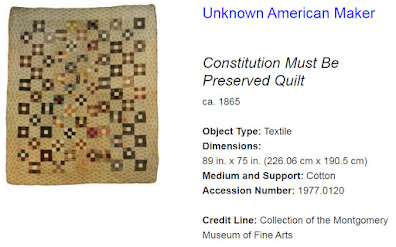 An intriguing online catalog entry from the Montgomery Museum of Fine Arts: A nine-patch quilt with "Constitution Must Be Preserved" associated with it and an estimated date of 1865.

My guess is that the fabric in the alternate squares and borders is this print: 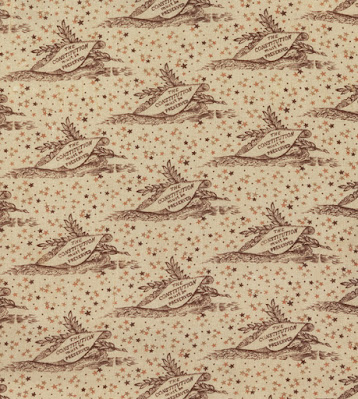 I'd have guessed the fabric was printed for the 1876 Centennial Exhibition
but the Cooper-Hewitt Design Museum at the Smithsonian, which has a
piece, tells us it's a campaign print. 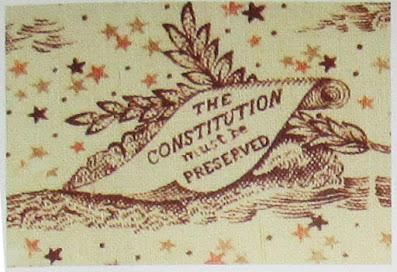 "The Constitution must be Preserved" may relate to the pre-Civil-War election of 1860 when four men
ran for President. Abraham Lincoln and Stephen Douglas are best remembered but John Breckenridge and John Bell of Tennessee also ran.
Bell's party was the Constitutional Union party 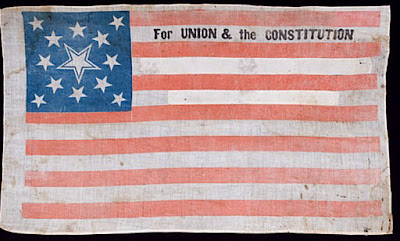 Jeff Bridgman has sold several Bell flags over the past few years. 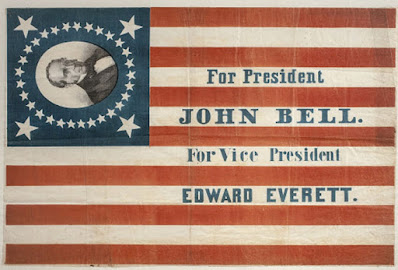 Bell came in third in the field of four.
Here's what the Cooper-Hewitt has to say:

"This printed cotton calico featuring the slogan “The Constitution Must Be Preserved” was produced for the presidential campaign of Tennessee senator John Bell, the Constitutional Union Party’s candidate in the contentious election of 1860. The party was formed in 1859 by former Whigs and members of the Know-Nothing party to attempt to bridge regional tensions by supporting the preservation of the Union without regard to the slavery issue. Bell was, himself, a slave owner, but opposed the expansion of slavery into the western territories – which was also the official position of the Republican Party, although many Republicans favored the total abolition of slavery."

https://www.cooperhewitt.org/2017/07/03/contentious-election/
The print is rare. I'd hoped to find it in context with other prints to determine a date of 1860 or 1876. I did look through our best document of Centennial prints, the Bradbury quilt in the National Museum of American History at the Smithsonian and did not see this print. 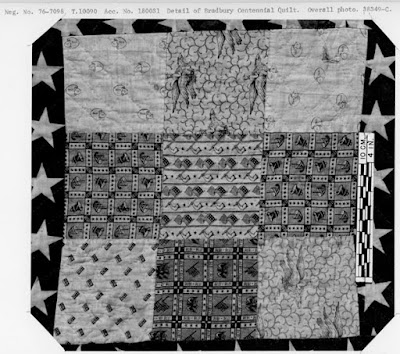 The Bradbury quilt is a patchwork catalog of Centennial prints
from 1876.
https://americanhistory.si.edu/collections/search/object/nmah_556351
The only examples I've seen of the Constitution print are in the Cooper Hewitt and the Montgomery Museum. Any one ever seen another example?
Looking through Newspapers.com for the slogan I found a reference to the print in January, 1860, which upends my theory about the Centennial association. 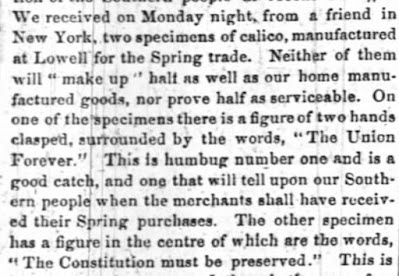 The editor of the New Bern, North Carolina paper was sent two swatches of fabric; the second "has a figure in the centre of which are the words, 'The Constitution must be preserved.' "
The first specimen probably refers to this print. 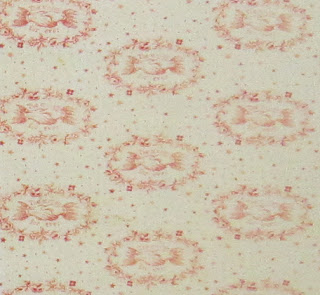 The words "The Union For Ever" are just legible.
So the print is 1860, mentioned on January 18th, a date so early in the year that it also upends the theory that it is a Bell political campaign textile.
The Constitutional Union Party had only been discussed a few weeks earlier at a meeting in December 1859, officially formed on February 12, 1860. They met in convention in May and nominated John Bell. There was really no Constitutional Union party yet in January when the fabric arrived in New Bern. 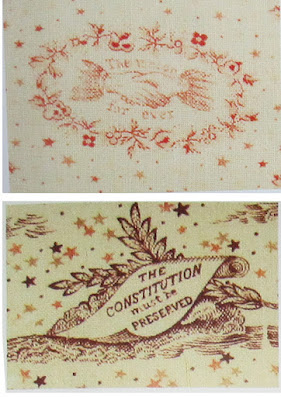 Then the question is: What Have We Here?
Two pro-Union images on star-spangled backgrounds
available as early as January, 1860.
Posted by Barbara Brackman at 6:00 AM

Beautiful and fitting for today's politics as well

I wish that fabric was reprinted now.

Wonderful article, I really enjoyed it! So fitting for the times. Would love to see a reproduction of these fabrics. Thank you for a great story.

Great researching the way you are able to connect the historical dots with reference materials! I have always loved the image of the shakeing hands and the sentiment! Thanks!

A great read today and another reason why you are so good at what you do. Thank you

I inherited 2 Civil War era quilts that my GG Grandmother Portis made in the mid 1800's. Unfortunately I loaned them to the little museum located in my hometown. I did not realize that they did not keep the heat or air on. When they got them the quilts were in pristine condition. They had them on the beds and some light got on one of them and it faded in one corner. The other developed those brown spots that some older fabrics get. I got them back and was really upset that these quilts that had lovingly been preserved were not handled with care as I thought they should have been.

Another fun fact: When General Sherman came through the South burning every building, taking all the livestock for his men, and pillaging everything in site he wanted to let his men rest for a few days so they stopped here. He stayed in our museum, which was at that time an inn where the stagecoach could stop on the way to Jackson for the passengers to spend the night and get something to eat. Because our town was named Union he decided not to burn it down and did not allow his men to steal anything nor take any of the livestock to the relief of the citizens.