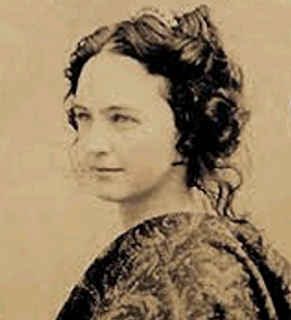 Elizabeth Bacon Custer (1842-1933) about
the time she attended St. Louis's Southern Relief Fair.
Elizabeth Bacon Custer, traveling west with her soldier husband after the Civil War, stopped in St. Louis for a few days of festivities in the fall of 1866. She enthused about a Tournament, a medieval re-enactment that appealed to southern fans of Sir Walter Scott, already framing the war as "The Lost Cause." The Tournament was the highlight of the weeks' long fundraising event The Southern Relief Fair.

Libbie Custer to her cousin:

"Oh, Rebecca, how delighted you would have been! It was something so novel to us and reminded us of "Ivanhoe" and other descriptions of olden days... Thousands of people sat around the arena on the spectators stand. The Judges Stand is a three story temple built building in the centre, with fountains on the lawn around it. The costumes of the riders and the excitement of each tilt was so new to us..... In the evening the Queen of Beauty was crowned by the successful chevalier at a ball given at the Southern Hotel.... "

Based on successful war-time models of women's fundraisers The Southern Relief Fair was organized by the city's Missouri Southern Relief Association. Organizers solicited gifts and war souvenirs, among them a lock of Robert E. Lee's hair, which he apparently sent with a letter. 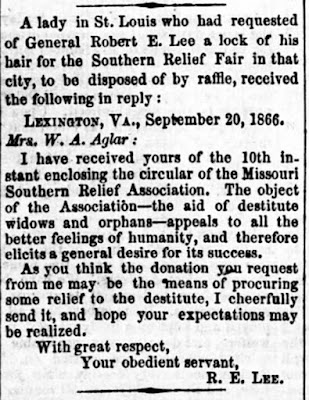 "The object of the Association---the aid of destitute widows and orphans,"
as Lee was informed, motivated him to take a scissors to his locks. 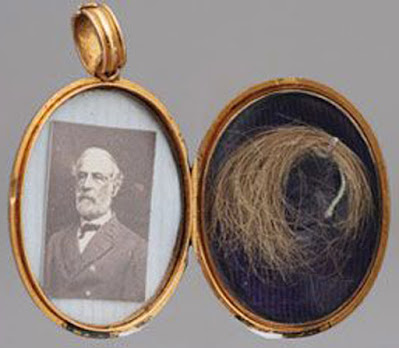 We hope Mrs. Custer got a chance to look at the Turkish Table inside the hall. It was one of the most successful areas raising over $10,000. 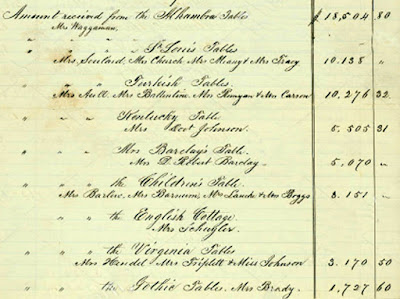 Oddly enough, the Turkish Table was where quilts were sold and raffled. Several silk quilts were mentioned and one "famous quilt" that had been around the fundraising events that year, won and then re-donated. 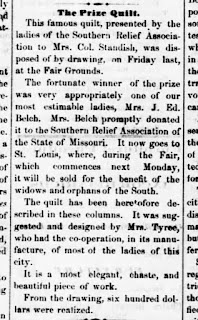 We'd like to see more this "most elegant, chaste and beautiful piece of work," which caused some controversy. Apparently made for a woman known for her charitable work in Jefferson City, Missouri's capitol, the quilt was made by Mrs. Tyree with many fabric donations (in a time of scarce fabrics.) 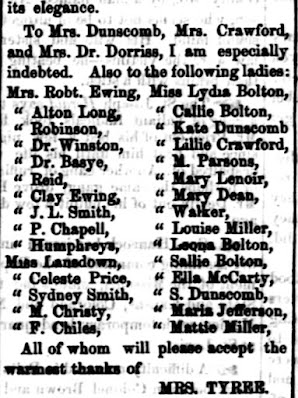 I would guess the maker was Sarah Chiles Tyree (1828-1894) of Jefferson City who also won a prize that fall at the Cole County Fair on a silk quilt (perhaps the same quilt.) 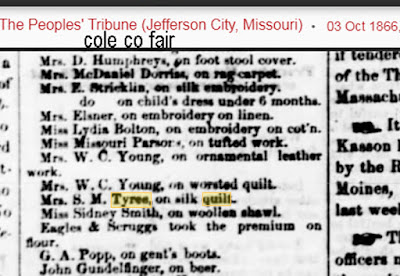 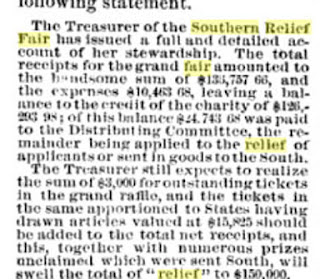 President of the Association was Rebecca West Chouteau Sire, who'd inherited the once extremely lucrative American Fur Company. After her widowhood in the 1850s she spent her own money and raised funds for good causes like the city's Home of the Friendless.
Dr. William Marcellus McPheeters, returned to St. Louis after banishment from Missouri (officially a Union state), was on the committee to disburse funds to the suffering Confederates throughout the South. He'd been chief of Confederate General Sterling Price's medical unit. His wife was a fair organizer. 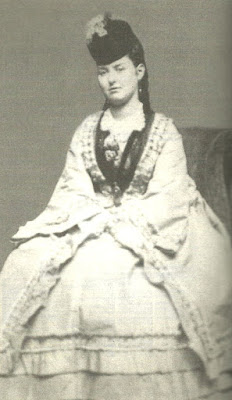 Sallie Buchanan McPheeters (1830-1912) spent a few days in a
Union jail with her children and was banished from St. Louis
for refusing to sign the Union loyalty oath.
William's brother Presbyterian minister Samuel B. McPheeters and wife were also banished for "unmistakeable evidence of sympathy with the rebellion,'' but after a personal interview Lincoln stayed that order.
The McPheeters post-war loyalty to the Confederacy is not in doubt either. An 1870 Jefferson Davis letter was sold recently in which Davis thanks Colonel G.W. Alexander & Mssrs Fife & McPheters for their assistance. William designated $3,000 of the funds to the relief of Jefferson Davis living in Memphis a few years after the war. 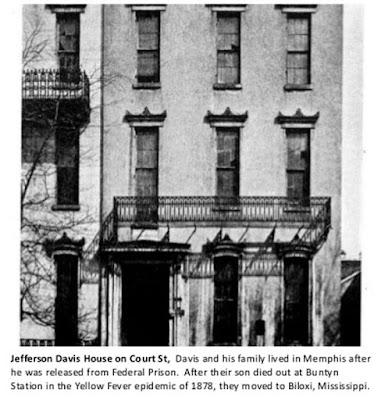 History really is fascinating isn’t it? My grandfather delivered papers to Mrs. Custer as a youngster. (Also to Mrs Kellogg.)