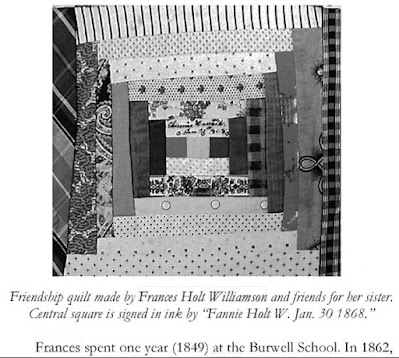 Detail of a log cabin quilt with an inked date 1868.
Alamance County Historical Society
Pictured in The Book of Burwell Students

We have written records of Log Cabin quilts before 1870 but few actual quilts with dates inscribed. The signature above refers to Frances Annthea Holt Slade Williamson (1837-1918) of Alamance County, North Carolina.  The quilt is said to have been made by Fanny Williamson for a younger sister, either Mary Elizabeth or Emma Virginia Holt. 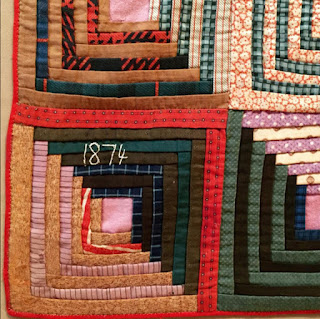 Log Cabin with the date 1874
Wool, silk & mixed fabrics
Smithsonian
Textile historian Virginia Gunn found Log Cabins mentioned by name at the Ohio State Fair in 1863 (the pattern seems to have developed about that time) and again in 1868.

Here's a wartime reference to some Pennsylvania women in the
Log Cabin Aid Society making "1 log cabin quilt" for Union soldiers.
I'd have guessed a Log Cabin quilt from a North Carolina woman would be unusual as the pattern seems to have originated with symbolism linked to Abraham Lincoln, President of the Union. You might wonder if Fanny or her sisters were Union sympathizers but this is very unlikely. Fanny's first husband, her cousin Thomas Slade (about 1820-1864), was a Captain in the Confederacy who'd been killed in Virginia in June, 1864. Holt brothers were Confederate soldiers. The Holts were well-to-do North Carolinians, children of textile entrepreneur Edwin Holt.
Surprisingly, fair accounts give us evidence of the popularity of log cabins with Southern quiltmakers after the war. 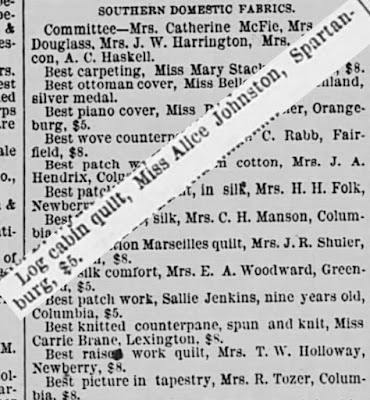 Here is one entered (and awarded a $5 prize) at the South
Carolina State Fair in 1869!
Alice Johnston from Spartanburg was on the cutting edge. 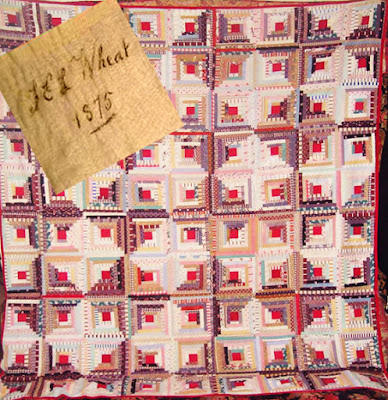 J C L Wheat, 1875
Found in the U.K. An early dated example of the popular design. 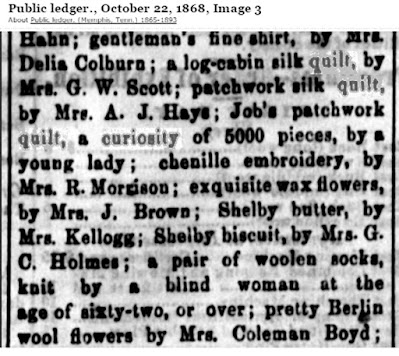 Mrs. G. W. Scott entered a silk log cabin in a Tennessee fair
in 1868. (The Job's Patchwork quilt was probably a hexagon---
Shelby butter? and Shelby biscuit as needlework? I have no idea.) 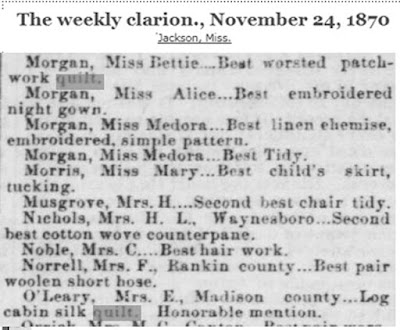 Mrs. E O'Leary of Madison County, won
an Honorable Mention with a silk Log Cabin at
a Mississippi fair in 1870. 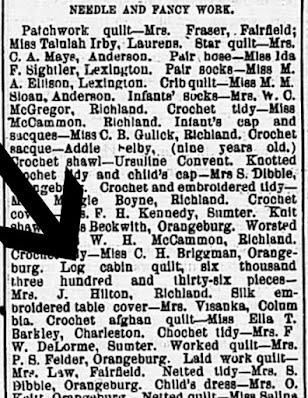 Mrs. J. Hilton of Richland, South Carolina
entered a Log Cabin with 6,336 pieces
in the 1872 state fair.
The pattern was a true fad in the 1870s and '80s, and any political association may have meant little to the Holt sisters---or to anyone else in the South. 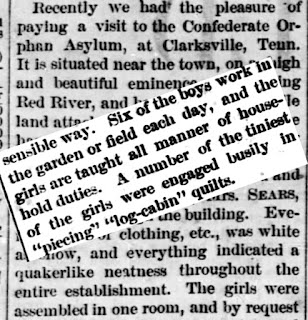 Confederate war orphans in Clarksville, Tennessee
were piecing log cabin quilts in 1869.
Fanny's quilt might actually say 1888, a date that fits a little better with the glimpse of the cotton prints in the block. She married Dr. John Williamson in 1865 so that "W" at the end of her name doesn't help us on the date.
See some other Holt family quilts by scrolling down here:
https://www.alamancemuseum.org/Collections.aspx

Friend Virginia:"I'm guessing Shelby biscuit quilt is a puff quilt. Have poked around a little and found info re: the Shelby Biscuit company but nothing quilt related."