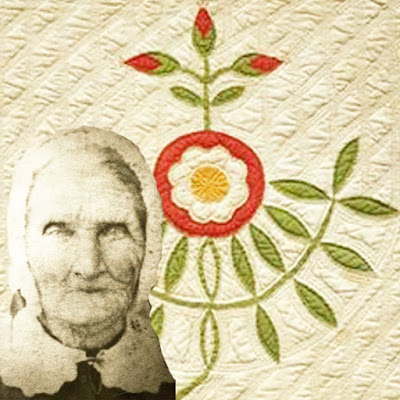 Dorothea Keys McClanahan 1802-1892
Her quilt was recorded in the Texas project and pictured in their book Lone Stars.

When the Civil War broke out in 1861 Dolly Keyes McClanahan had been living in Lee County, Texas for about 15 years. She and her husband John Milton McClanahan, known by his middle name, had immigrated from Danville in North Central Alabama to Texas in 1846. 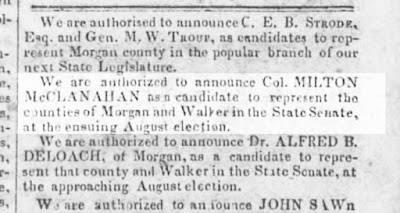 Milton, a veteran of the War of 1812, had been an Alabama state senator in the early 1840s but family stories implied he left for Texas due to a weariness for politics. With their children and enslaved people they settled in the new state northeast of Austin, which eventually became Lee and Burleson Counties... 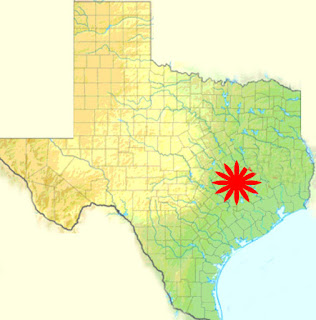 ...Somewhere close to the red star near Yegua Creek. 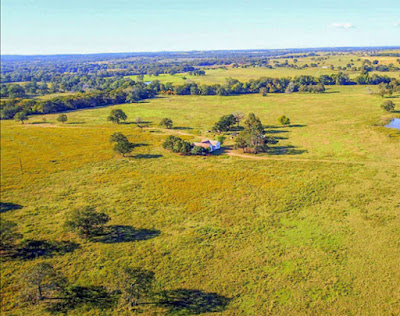 Southerners brought a version of the Old South to the Texas plains, planting cotton and corn
on small plantations worked by slaves. The year the McClanahans settled 866 white people and 330 enslaved African-Americans lived in Burleson County.

All nine McClanahan children were born in Alabama where
Dolly and Milton met and married. 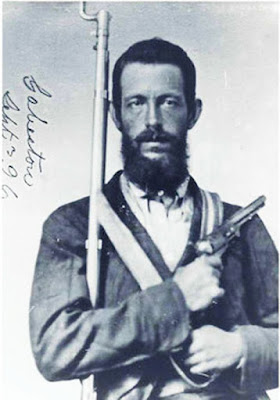 In 1861 Dolly had just turned sixty; in the fall of that year her 65-year-old husband Milton died. 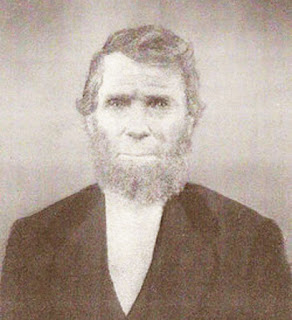 She was apparently living in comfort on the "old homestead" in what was then Burleson County with sons James and William Henry, daughters and servants and farm workers still in slavery. Both James and John Milton II had joined the Confederacy. Oldest John, married and farming nearby, served in Waul's Legion, Commissary Division and may have gone to Vicksburg with them. Second son John served for a short while with the 2nd Texas Infantry Company H in Galveston, but became disabled enough to be sent home. He is recalled as missing a leg.

War and widowhood may have reduced Dolly's fortunes and increased her anxieties but the 1864 tax records for Burleson County indicated she owned 321 acres worth about $1,000. Her greatest wealth was in her "Negroes" 17 people worth $5,100. In that last year of slavery there were 2,905 slaves in the county. 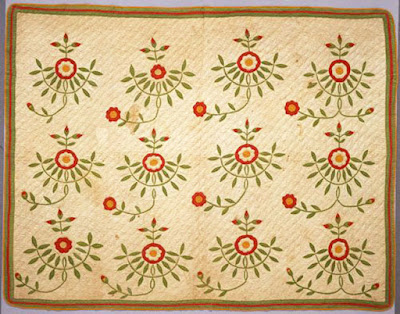 The family who've handed down her quilt believe it to have been made for the occasion of daughter Nancy's wedding to Samuel Pinkney Peebles on March 18, 1864. Nancy did not live long after her marriage, dying at 40 in 1877. Son Eugene, about 12 when he lost his mother, inherited it and passed it to his granddaughter. 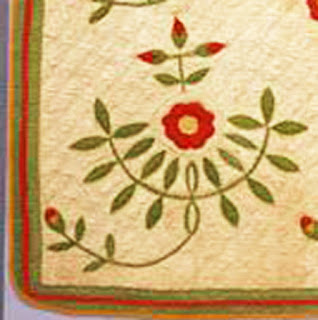 The quilt looks to have a border of four strips of Turkey red, chrome orange and the overdyed green common in mid-19th century fancy quilts. 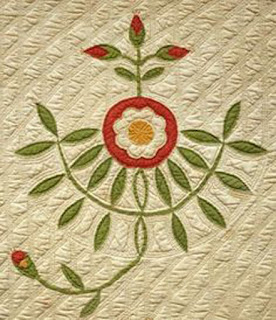 The quilting is triple parallel diagonals, also typical for the time, with some quilting following the rose design and leaves. What is most interesting about the quilt is that much of the floral is pieced, rather than appliqued. Quilting highlights the circular repeat. See last week's post for another pieced floral that looks appliqued. 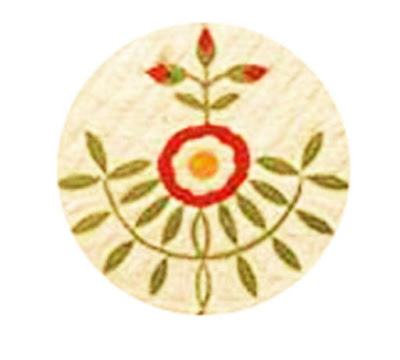 Leaves are pieced in there and the rose and buds may be too. 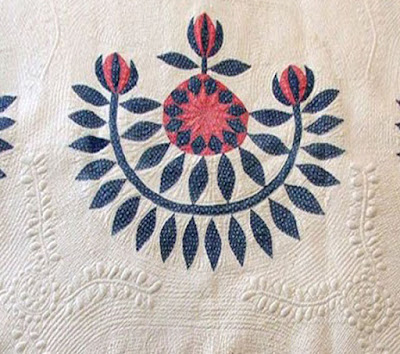 The pattern is unusual but not unique. A similar Texas quilt is in the collection of the Sam Rayburn house near Bonham, Texas. Curators believe their Prairie Rose quilt to date from the 1850s, inherited by the Rayburn family from Tennessee ancestors. 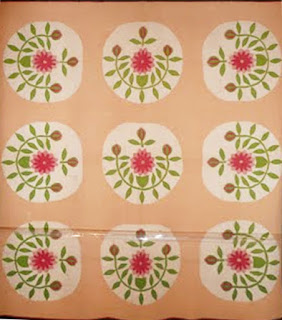 This one, perhaps set later, is in the collection of Texas's
American/International Quilt Association. The peach may
have once been a red, fading in the characteristic manner than
synthetic red dyes after 1880 often did. 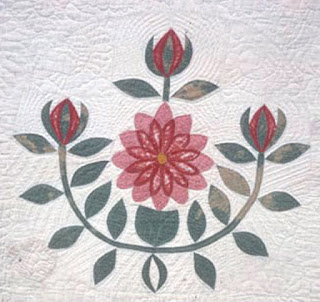 Quilt from Tennessee that remained in Tennessee.
Tennessee project & the Quilt Index

The pattern, pieced or appliqued, was popular and has many names. Rose Tree, Missouri Rose, etc. See a post here:
https://encyclopediaquiltpatterns.blogspot.com/2017/04/rose-tree-show-off-piecing.html

Dolly lived to be 89 years old, apparently still wearing the fashions of the early 19th century as her portrait in a cap above shows. Youngest son Henry never married. He and brother James and his family lived with their mother in the house. The story about Henry is that after his mother died he refused to leave the house because he was content with the "slaves" who waited on him there. By the 1890s those people had not been slaves for 30 years but some must have stayed on as paid servants.

Anytime we find a quilt attributed to a woman with 20 slaves on a cotton plantation we have to wonder who had a hand in the quilt.

Here's Dolly's Find A Grave site with a photo of her quilt included:
https://www.findagrave.com/memorial/35734749/dorothea-mcclanahan

I wonder if I have one of her quilts. It has that same quilting and triple rose bud....and I bought it in Texas. It is shredded badly, but I love it anyway.

Am I confused? She had two sons named John?

I ordered the Cassandra pattern from web store. Haven’t received any acknowledgment or pattern. Did you receive payment?