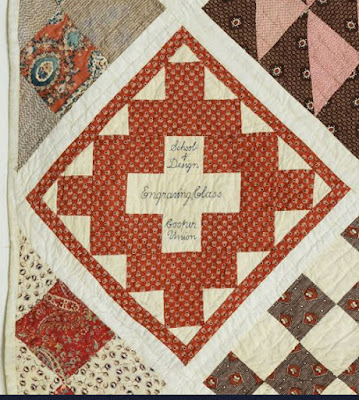 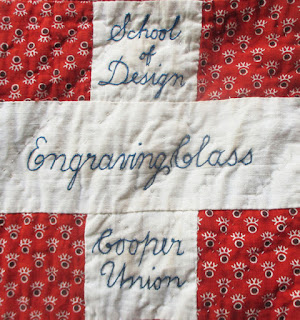 I recently bought this sampler quilt that I believe was made to donate to the Union Sanitary Commission during the Civil War. The inscription indicates it was made by a quilting group who worked under the supervision of Gulielma Field, an engraving teacher in the School of Design at the Cooper Union art school. 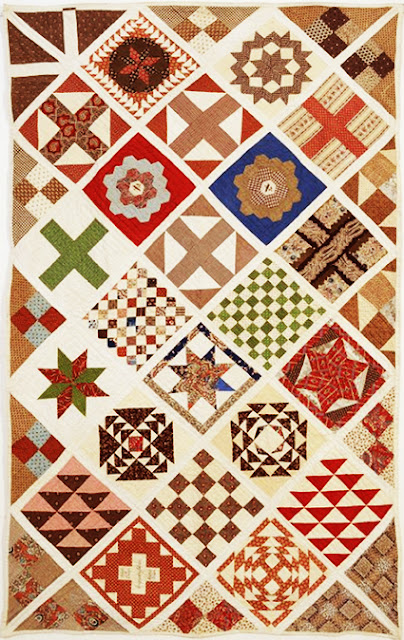 The narrow quilt is 54" x 88",
made to Sanitary Commission specifications 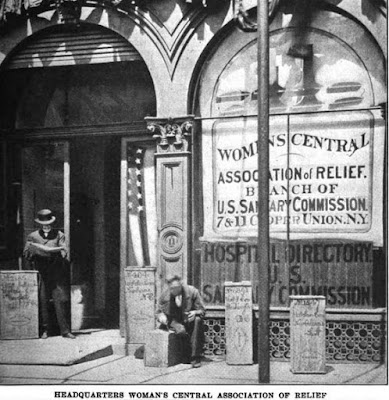 The quilt descended in the family of Samuel W. Bridgham who may be in this wartime photo shot in front of the Cooper-Union building during the war. He might be the man addressing boxes to be shipped to hospitals or the one reading off the addresses. Bridgham's assistant was George Roberts described as a porter and we probably have a view of them doing what they did every day during the war. 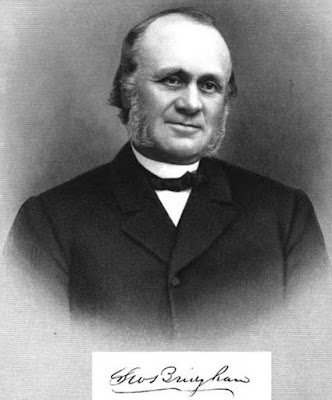 Samuel Bridgham became Secretary of the New York City branch of the Sanitary Commission, the Women's Central Relief Association, and head of their Supplies Subcommittee early in the war.  In a short biography of Ellen Collins who worked with him there Louisa Lee Schuyler said that Bridgham came "daily to the office to direct the work of porters and teamsters." The WCRA had offices in the Cooper-Union building.

In their History of Women's Work in the Civil War Brockett and Vaughn mention Bridgham, who "put his broad shoulders to the wheel." In 1863 the war intensified and the work become harder.

"He had been a member of the board from the beginning, but not a 'day-laborer' until now....he was a night-laborer also. At midnight, and in the still 'darker hours which preceded the dawn," Mr. Bridgham and his faithful ally, [George] Roberts, often left their beds to meet sudden emergencies, and to ship comforts to distant points. On Sundays too, he and his patriotic wife might be easily detected creeping under the half-opened door of Number 10 [Cooper-Union], to gather up for a sudden requisition and then to beg of the small city expresses, transportation to ship or railroad. This was often his Sunday worship. His heart and soul were given to the work." 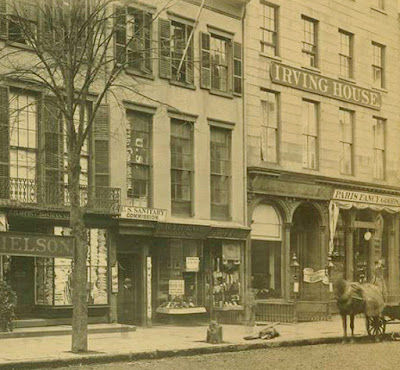 The Sanitary Commission itself had separate New York offices
on the second floor here at 498 Broadway, the center building in this photo.
The Irving House Hotel is next door. 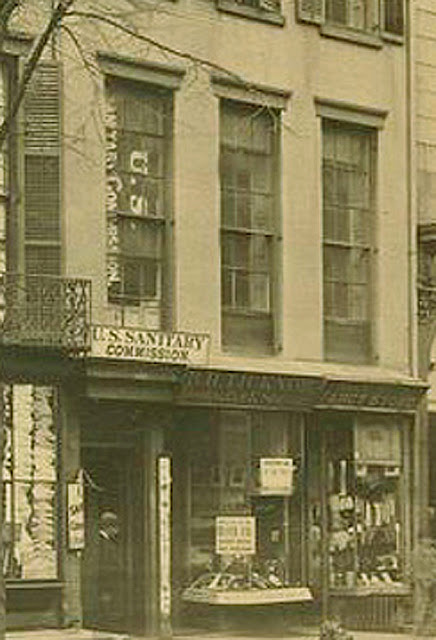 They hung a flag in the window.

Samuel Bridgham sounds like a very admirable man and it's a real pleasure to have his quilt and discover his story.

This quilt has come to the perfect person to posess it and become the caretaker of its provenance. Is any of this history archived at Cooper Union? That would be a great place for a small quilt exhibit of Sanitary Commission quilts as few of them as there are still in existence.

The quilt has found its perfect home. Sometimes fate seems to work in mysterious ways!