A Quilt for General Grant from Herkimer, New York 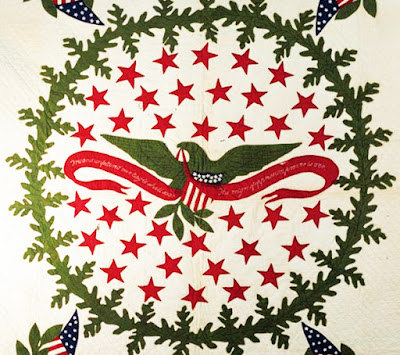 The eagle in the center of this quilt holds a banner with the words:
"Free and unfettered our Eagle shall soar. The reign of oppression forever is o'er." 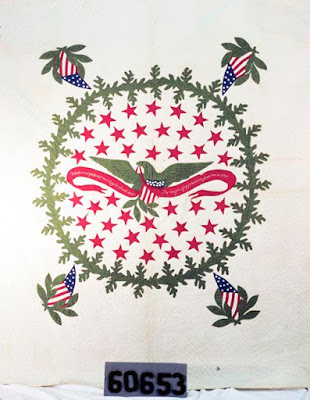 The quilt was found in the West Virginia Heritage Quilt Search.
Click here to see the record:
http://www.quiltindex.org/fulldisplay.php?kid=50-8A-1027

It had been given to the owner's grandmother with the story that the top had been stitched by an unknown woman from Herkimer, New York.


"She had great admiration for General Grant and in the late 1860's designed and made this quilt expecting to give it to the then President Grant. She died before it was quilted (after working for two years on it) and a Mrs. Mae Petrie, who had given her a home, presented it to the owner's grandmother. The 39 stars represent the number of states in the Union in 1868. The top 13 represent the original colonies. The oak leaves are for strength and the laurel leaves for victory, and the words are for the freeing of the slaves. The ensign is the United States government." 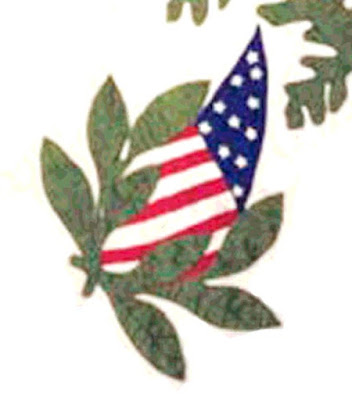 This must be the "ensign" that stands for the U.S. Government. It's an unusual image, a furled flag that may be a bud. Like the poetry, this might be original to the quiltmaker. 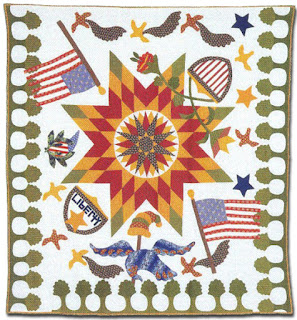 When we were working on my first book about Civil War quilts Terry Thompson made this imaginative quilt she called Union Star. She included the furled flag ensign in the center left.


Below is the caption from
Quilts From the Civil War. 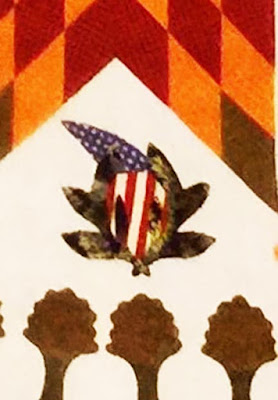 Apparently the family had the original top quilted later. The applique looks like an unfinished design---the maker needed another year or two. The center is so detailed and impressive, one would guess she had equally elaborate plans for a border. 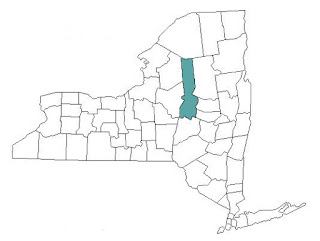 Herkimer County is in the center of upstate New York,
the town of Herkimer is between Albany and Syracuse.

There are many Petries in 19th-century Herkimer. Perhaps a genealogist can find who was living with Mae Petrie in the mid-1860s.
Posted by Barbara Brackman at 6:00 AM

What a breathtaking beauty! This might be one of those instances in which we are better off that the quilt was never finished, used and lost. Did Terry borrow the flag/bud image from the featured quilt, or did it exist elsewhere as well?

I think the ensign in the subject quilt is the shield that the eagle is holding close to his body; perhaps you missed it earlier on?

Thank you as always for sharing the history and images!
Cathy von Jess in Acton, MA

Cathy, maybe that red banner with the words is the ensign.

According to Google, an ensign is a carrier of the flag. "As the junior officer in an infantry regiment was traditionally the carrier of the ensign flag, the rank acquired the name" My guess is that the ensign is the eagle which represents the federal government.

What an amazing quilt! Wish I could see it in person. Thanks for sharing it with us.