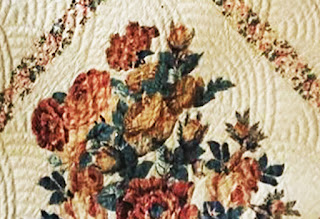 John C. Calhoun's South Carolina home Fort Hill, which is part of Clemson University, has shown several quilts over the years. Calhoun was the major spokesman for secessionists and pro-slavery Southerners in the first half of the 19th century. 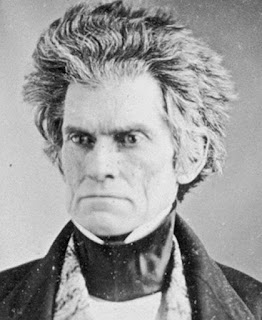 He and wife Floride had seven children who survived infancy. I noticed this cut-out chintz applique in a photo, which said  it was made by his daughter Martha Cornelia Calhoun. 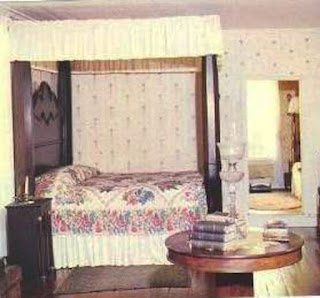 Cornelia's quilt is often shown on a bed in the master bedroom.
This postcard may be from the 1960s or '70s 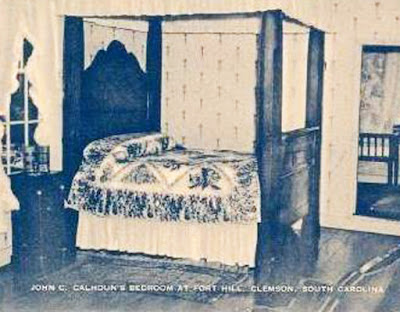 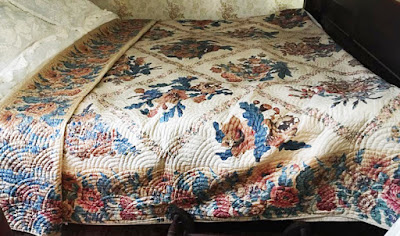 The Fort Hill historic home recently posted pictures of the quilt
on their Facebook page. I brightened them up a little so the details
are visible. 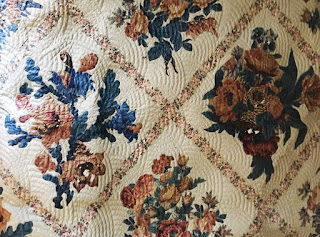 Martha Cornelia, always called Cornelia in her family, was born in Georgetown, Virginia,  while her father was Secretary of War under President James Monroe. She was handicapped by deafness and a spinal disorder and used a wheelchair.  Her health was always a concern to her family. Cornelia died rather suddenly at the age of 33 in 1857. 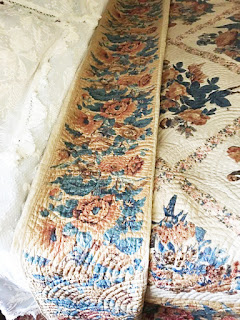 Her chintz applique quilt is done in patchwork style
common in the Carolinas before the Civil War.

The all-over quilting design, concentric quarter circles that we might call fans, was quite popular in the South in the last decades of the 19th century and into the 20th. Is it typical of Carolina quilts during Cornelia's lifetime (1824-1857)? Was her chintz applique quilted before her 1857 death or after? Can't say from the photos and, since I see so few Southern pre-war quilts, I probably couldn't say if I saw it in the cloth.

See more about the Calhouns here:
http://www.clemson.edu/about/history/calhoun-clemson/floridebcalhoun.html
Posted by Barbara Brackman at 6:00 AM

It's a beautiful quilt, my mother would loved it, because she loved chintz!
I wonder if it's hand quilted or by machine!
Thank you again for this journey in your history.

I was shocked to see the all-over "Baptist Fan" quilting on this quilt. I definitely think the quilting was more recent. Has someone written on the history of American quilting designs?

Rina- hand quilted.
Suzanne - not yet.

That is beautiful. The quilted fans look small to me...or is that just me? Lovely.

Jill. they are very neatly done and rather narrow. I have seen quilts dated in the 1840s with reliable dates with fan quilting.

The narrowness must be what gives them the small and delicate look to me. Thank you for the response.