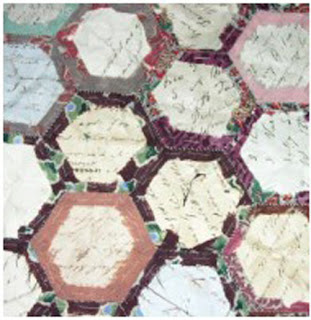 Last week we looked at the kinds of paper that backed hexagon patchwork during the 19th century, when paper was valuable enough to be recycled for needlework projects. 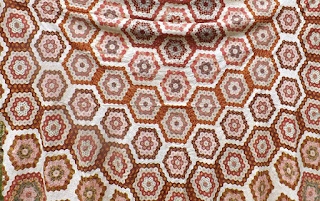 "Waste paper" as it was called, was commonly used for mosaic patchwork 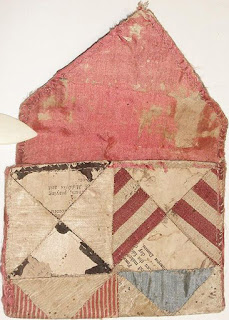 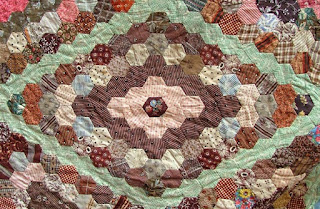 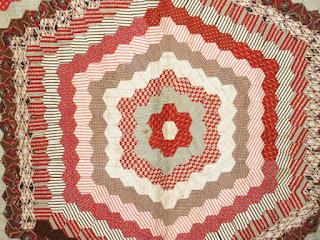 Seamstresses living in the Confederate states had a hard time finding paper to recycle. Paper of any kind became scarce after a few years of war. Evidence: There's a class of stamp collectibles called adversity covers, which are Southern envelopes made of wallpaper. 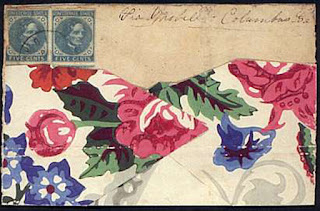 
"A favorite night's employment was found in making envelopes. No bits of white paper suitable for writing with pen and ink could be wasted in envelopes. Thus it happened that wall paper and sheets with pictures on one side,...served to make envelopes, neat enough. These we stuck together with gum from peach trees." 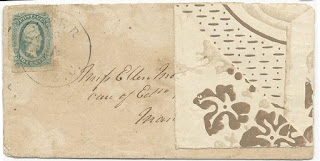 These envelopes have been folded to show the wallpaper inside.
When mailed all that was visible was the back of the paper. 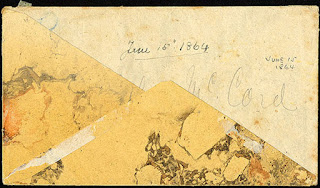 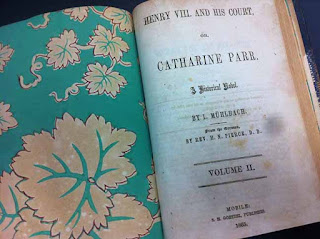 Wallpaper was also used for book publishing as in this
novel printed in Mobile in 1865. 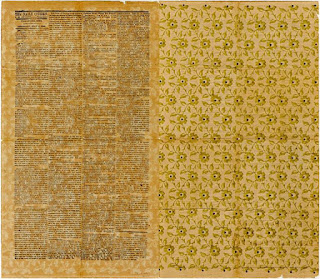 Most famously, the Vicksburg Daily Citizen was
printed on the reverse of wallpapers during the seige of
Vicksburg in 1863. 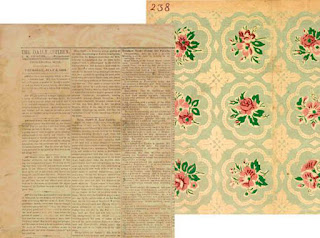 This issue from the Library of Congress shows a sample number on the colored wallpaper. I would
guess most of these recycled wall papers are from sample books or unused rolls of paper. The idea of ripping the paper off the wall is more romantic, but sounds rather impractical.

Private letter writers, government document printers and publishers used other kinds of waste paper with blank backs, much as seamstresses paper-piecing hexagons and mosaic patchwork had been doing for decades.

William Watson's memoirs include a recollection of a special wartime paper manufactured in the Confederacy:


"Ordinary writing paper had now about disappeared, and all the army forms and documents were made of some kind of home manufactured brown paper — something like that used by grocers in wrapping up goods."

Wallpaper samples on the reverse of a hexagon quilt might be an interesting choice for a re-enactor. Pattern on the front, pattern on the back. 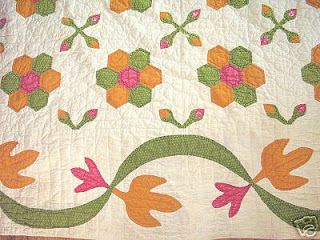 Hexagons in a mix of styles:
Mid-19th century red and green applique with rosettes.

Unlike the scrappy tops above, this one is quilted. 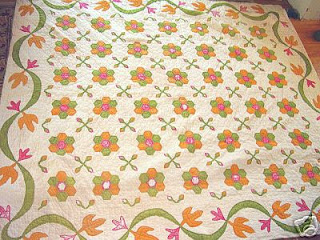 I found this very interesting to know about-thank you. It is amazing what we can recycle into something else

Why was there so much wallpaper lying around in the South? Was every parlor waiting to be redone with wallpaper when War broke out? Had people saved unused wallpaper for some reason? Was it all hideous?. It's interesting to think about.

Today's wallpaper is often pre-pasted, that is, backed by a coating of glue which is activated by water. Be sure to avoid this kind if using modern wallpaper for piecing. I think most modern wallpaper is sold pre-pasted and a lot of it also has a vinyl component. It might not be easy to find the old-fashioned kind.

Cannot wait to see what you will share with us next! Go Barbara!!!

Thanks for this very interesting post. I didn't know about adversity covers (in the context of quilting they could be hard-times quilts!).

Such interesting reading. We could all take a lesson from this post and try to make do with what we have on hand. I love English paper piecing and cut my own hexagons by hand. I use them very carefully so that I get many uses out of each one!