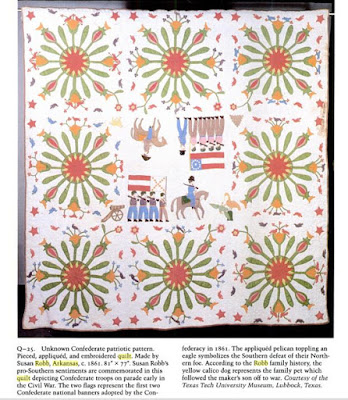 One of the most impressive quilts related to the Civil War is now on display at the Autry Museum in Los Angeles in the exhibit Empire and Liberty: The Civil War in the West, up through January 3, 2016. 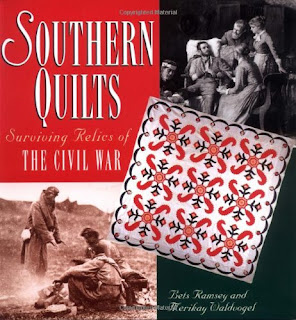 Susan Robb’s quilt, featured in Bets Ramsey and Merikay Waldvogel’s book Southern Quilts: Surviving Relics of the Civil War, pictures two columns of soldiers, one under the first Confederate national flag and the other carrying a Confederate battle flag.

Perhaps Susan meant to represent her sons who fought in Confederate regiments. 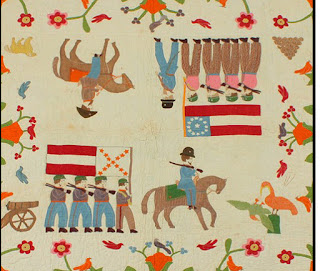 In the center block: two units of Confederate soldiers
led by officers. It is likely that one of these units
represents Susan's stepson William Henry Robb
who joined the Chicot Rangers in September 19, 1861,
when he was 16.

The Chicot Rangers became the First Arkansas Mounted Rifles. A week after William signed up Captain Daniel Harris Reynolds noted in his diary: "1861 Sept 28 Sunday. William H. Robb [and 5 others] came up to join my company." Robb was accompanied by David S. Stephenson, a carpenter  in his twenties who lived with the family on their farm. 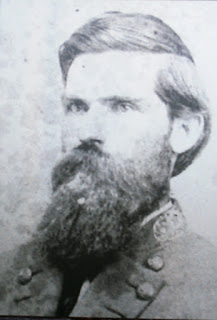 Daniel Harris Reynolds was Captain of
Company "A" of the 1st Arkansas Mounted Rifles. 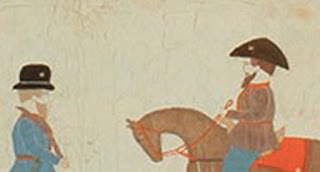 Is Captain Reynolds one of the bearded men in the scene?

There's been some confusion in describing the quilt over the years, with some believing the flag in this company to be a Union flag. 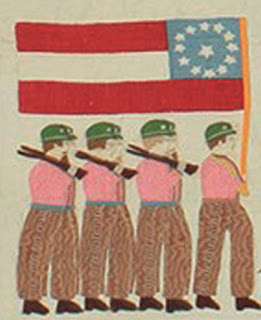 Notice the green kepi (hats) on the soldiers. 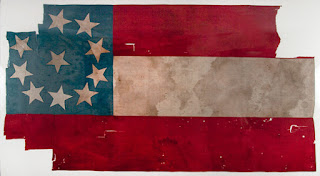 William's company fought at that battle in August before he joined. The flag above once had 11 stars to represent the 11 states of the Confederacy. It's definitely the first Confederate flag with its ring of stars and three stripes. Susan's flag has 13 stars, perhaps an echo of the original 13 colonies.

The uniforms in that company, pink shirts and brown textured pants, are not Confederate regulation.

but as the portrait above indicates, regulation uniforms were not required.

The other company is dressed in more official uniforms with red stripes down their pants legs and gray shirts. The flag may be a regimental banner similar to the one below 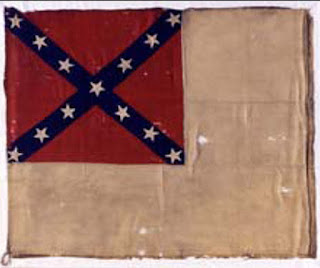 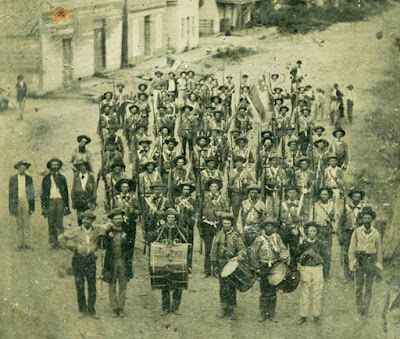 William is the only one of Susan's four sons and stepsons whom I found with a Civil War record. He was the eldest. Brother Theodore was 14 years old when William joined. Susan's youngest sons Aaron and Thomas were about 9 and 6. 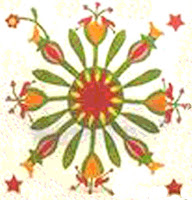 The eight floral blocks are her own version
of the Pomegranate

Thanks for discussing the images on this quilt. It has to one of best Civil War quilts from a graphic design point of view. It's so pleasing to look at.

Hi Barbara, thank you for share. I have this book,and reading your notes it is more interesting. Years ago I won a quilt from Connecticut,for my surprise under the top have another top. I would like to show you the fabrics in both tops.
I have a great passion og Civil War quilts cause here in Brazil there is descendants around my city. Our Imperor Dom Pedro II invited many southern to come to plant cotton in our area. Cel William Norris and his son Robert came in December 29 1865,after them many others families came. More about this is in this link: https://en.wikipedia.org/wiki/Confederados and if you search on Google you will find more information. I visited the President of American Fraternity and she had a Sampler with many blocks,I would like to show you too. Please contact me and I send you pictures.
Have a nice Sunday.
Themis Abdo

Extraordinary quilt! I look forward to your posts every week. Thank you for your invaluable contribution to this honored American craft.
Buckleberrie Quilts/Judie Bee

As always, great historical information. The quilt is such a perfect story-teller of its time, all in the subjects the quilter displayed. That's what I love about this type of history- it's all true and is from a person who was an actual eye witness. Now, many years later, we can see and learn from (who would have thought) a quilt.

My name is Brad Robb, I am the great great great....something or another nephew of Susan Robb. This quilt ended up in an estate that my grandfather was executor of. My grandfather donated it to Texas Tech when the heirs of said estate were arguing over it. I have viewed this quilt many times. I have touched this quilt, I have smelled this quilt. I have been taught of its history many times. You're correct that the pelican and the eagle represent the north and the south, you're correct about the dog, you're correct about the man on the horse being William. While I enjoyed your analysis about the confederate flags, and maybe I'm wrong, but whenever we viewed the quilt we were always told that it was not two confederate regiments, it was indeed the north and the south. Again, maybe I'm wrong but that's at least the family history I learned. Thank you for your article, it's nice to see the quilt getting some attention away from our little corner of the Texas panhandle.