More about Mary Green McPherson and her Secession Quilt 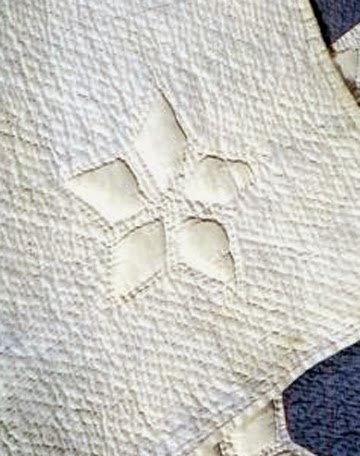 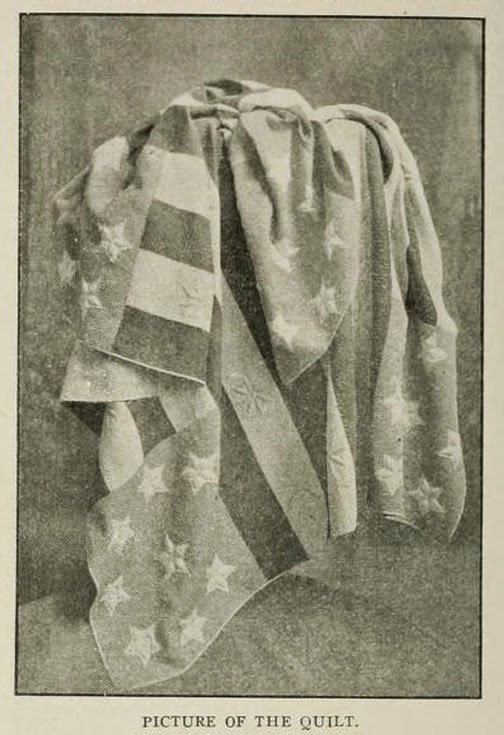 The black and white photo of the quilt now in the collection of the
Arkansas Territorial Restoration Museum shows the
stuffed quilting in the stripes and the starry fields.

See more about the photo from Confederate Veteran magazine in the last post. 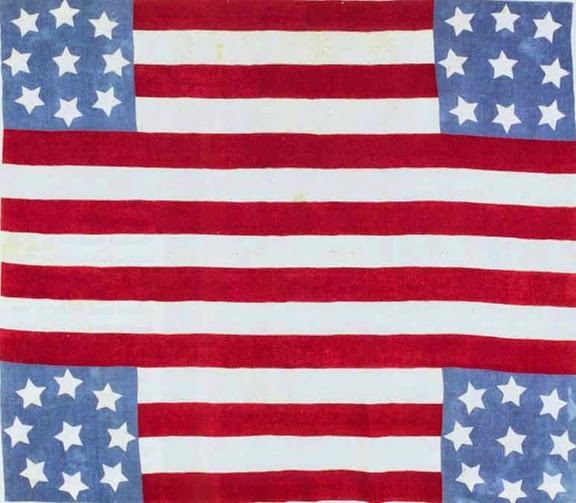 The stuffed work is not apparent in the museum's picture of McPherson's quilt. 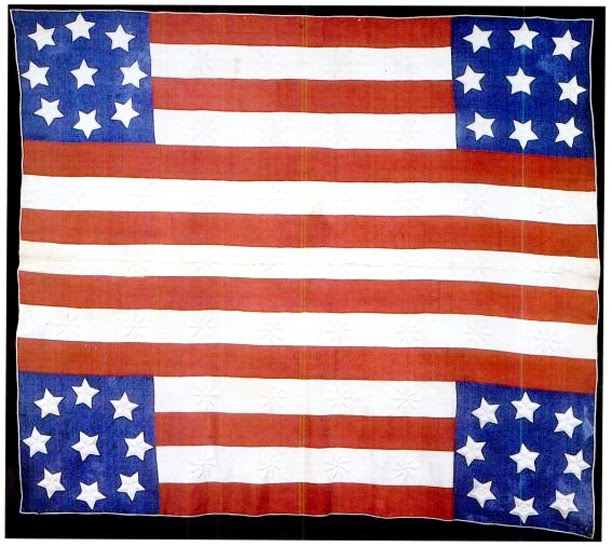 I did find another photo in a book called Arkansas Made: Furniture, quilts...
By Swannee Bennet,

Which shows the trapunto or stuffed work quite nicely. 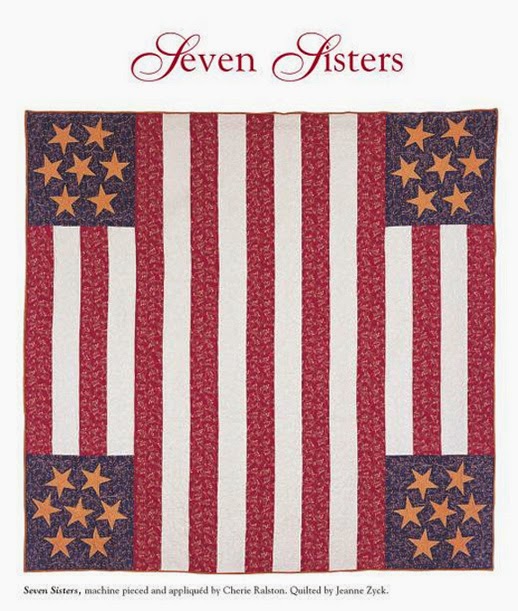 Mary McPherson's quilt was inspiration for this one stitched by Cherie Ralston for my book Quilts From the Civil War, where we gave a pattern for a version with seven stars. McPherson's quilt had nine stars to represent Arkansas as the ninth state to secede.

They lived in West Point, Arkansas, when it was 5 miles southeast of Searcy in White County. West Point on the banks of the Little Red River was a bustling river port before the Civil War, later overtaken by Searcy in the railroad era. 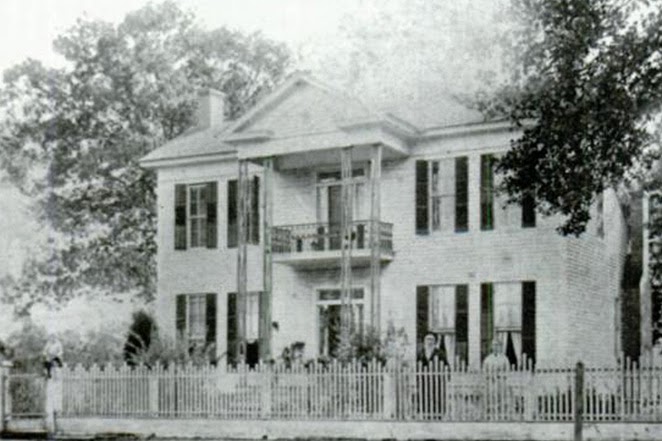 Elizabeth McPherson grew up to marry Dr. Samuel Thomas Tapscott
(1832-1919). Here family members pose before the Tapscott home in
Searcy about 1900 .
Mary Green McPherson died in this home in 1881 (the date on her tombstone.)

Neighbor Joshua B. Crow (1810-1866) from West Point purchased the quilt when it was auctioned to raise funds to equip Confederate soldiers. Crow was described in a family biography as a "well-to-do farmer living about six miles east of Searcy." The quilt descended in the Crow family and the story in the McPherson family, which might be why Mrs Green McPherson's first name has been lost. 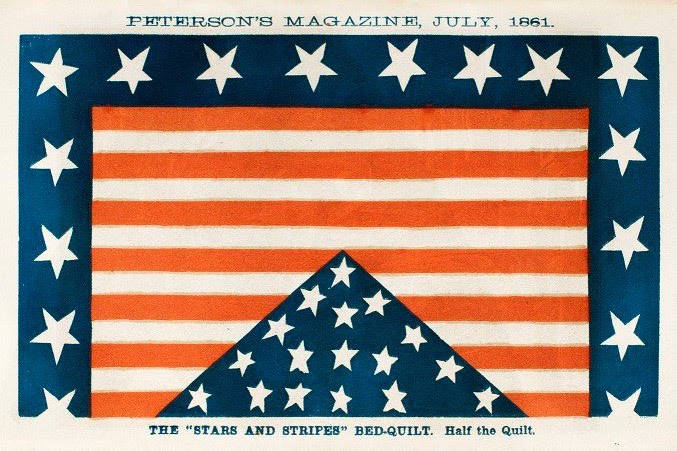 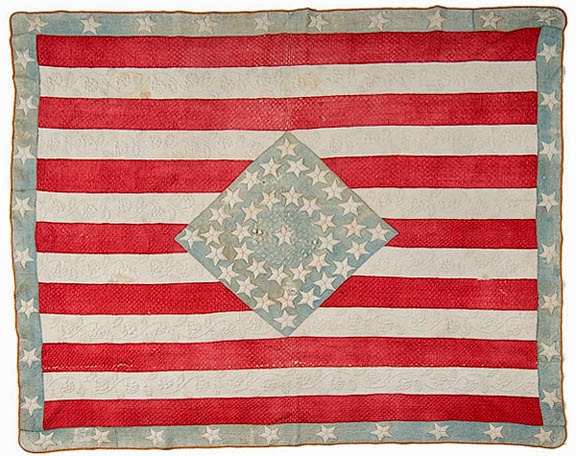 Many of these Stars and Stripes Quilts were made. This one
was sold at Cowan's Auctions. 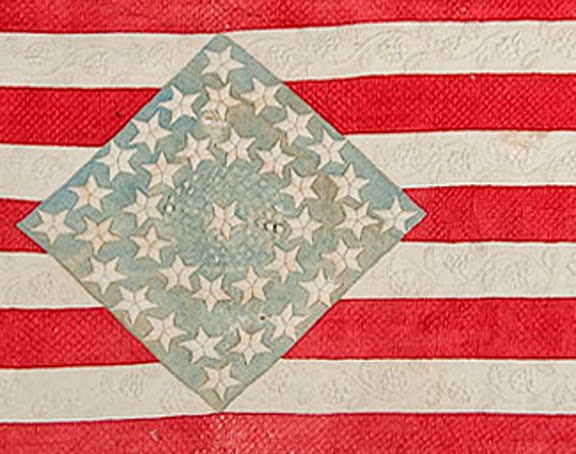 It also features stuffed work in the stripes and stuffed-work stars
quite similar to Mary McPherson's.
These stars were not shown in the Peterson's pattern,
which showed rather sketchy stars.

See more about the Stars & Stripes pattern at a post here:
http://civilwarquilts.blogspot.com/2011/07/30-petersons-stars-stripes.html

And on the topic of inspiration: 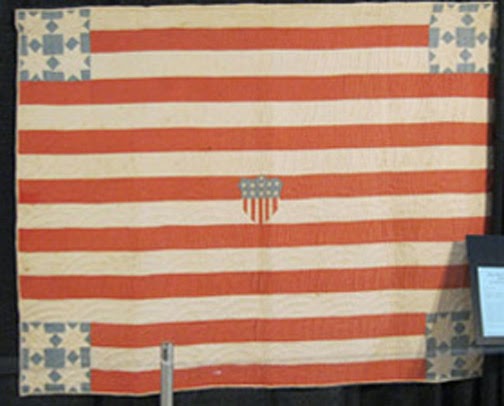 Cindy Rennels has in her collection of patriotic quilts
a 20th-century take on the McPherson quilt---
but it is decidedly NOT a Confederate commemorative. 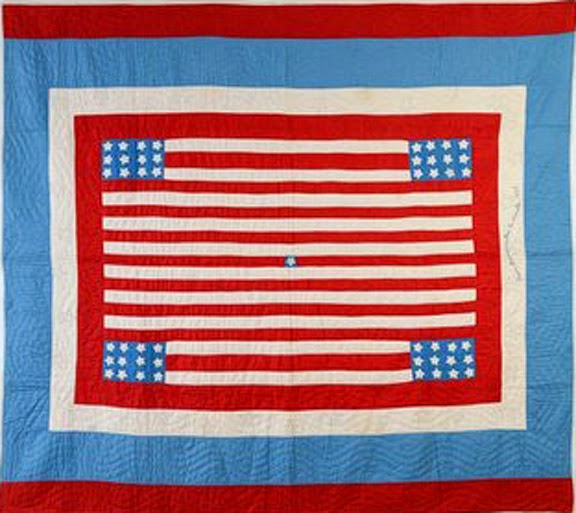 And here's one I found floating around on the internet with
4 x 12 stars = 48 and perhaps an extra star for Alaska?
I can't read the words on the right.

You are an amazing researcher!! Love all of the great old quilts. There is a little biography of the Crow family at this address: http://www.argenweb.net/white/history/Biographies/Goodspeed_White_County.html . Adam McPherson (Mary Green's husband) was born in Ireland and served as the postmaster for White County just prior to his death. The Mrs Gill referred to in the 1911 article was not actually Mary's granddaughter, but she was married to Mary's great-grandson. Interestingly Mrs Gill's maiden name appears to be Crow - but so far I can't make any connection to the Joshua Blair Crow family. Love your post and I find all of your historical info so intriguing!!!

Sorry, Barbara. The previous comment was mine. I forgot to log out of my quilt group's name.

Love this quilt and the story makes it even better.

The Seven Sisters quilt makes an appearance in the most recent issue of Civil War Times (along with some other familiar pieces).

Love that trapunto and the Libby Prison dog. Thanks for the link.

Would you tell me the source for the picture of the Tapscott home? I would like to use the photo on a profile for Dr. Tapscott. If it is copyrighted, I would like permission to use it.