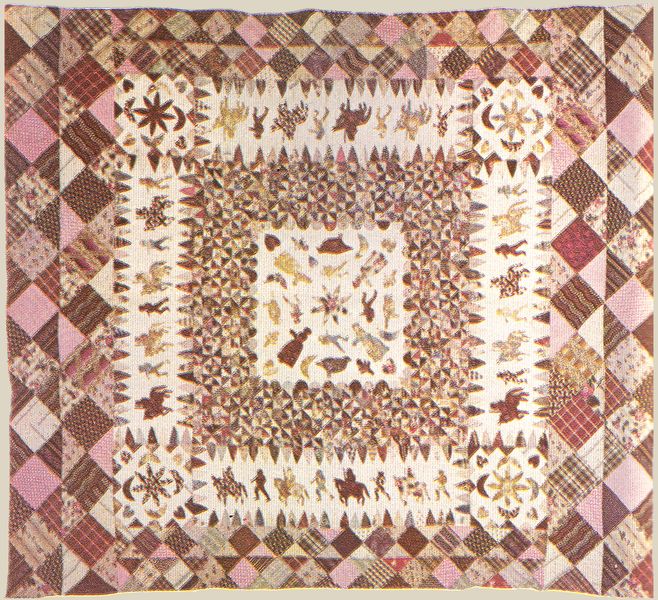 This unquilted counterpane has been in the collection of Vermont's Shelburne Museum since 1952.  In the original Shelburne catalog published in 1957 curator Lilian Baker Carlisle began her catalog entry with:

" This spread, illustrated and described in American Quilts and Coverlets by Florence Peto, was found in New Jersey and shows textiles much older than the Civil War period....Traditionally this counterpane was made by a Civil War veteran whose nerves had been shattered by his wartime experiences. After he was invalided home, he started this quilt as a therapeutic measure..."

She was using information from dealer and collector Florence Peto who found the quilt and probably sold it to the Shelburne. In her book Peto described the fabrics as "chintz, Scotch ginghams [woven plaids I assume], and paisley-patterned calicoes, all characteristic of the period..."

Peto saw symbolism in the imagery:
"Crescent moons, hearts, and fat, complacent doves may have been introduced to the militant picture to humor a wife or sweetheart." 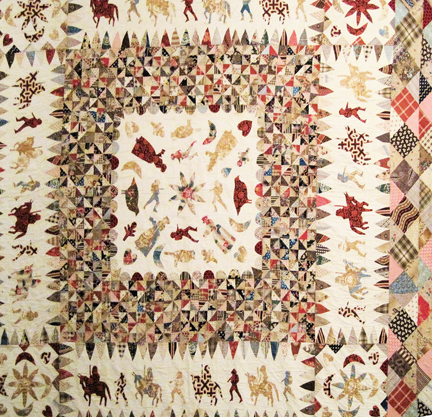 The central area has appliqued human figures around a star or sun. 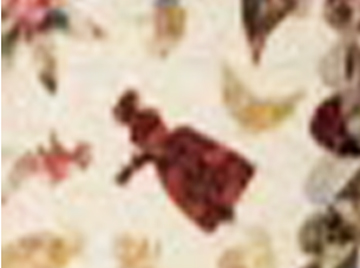 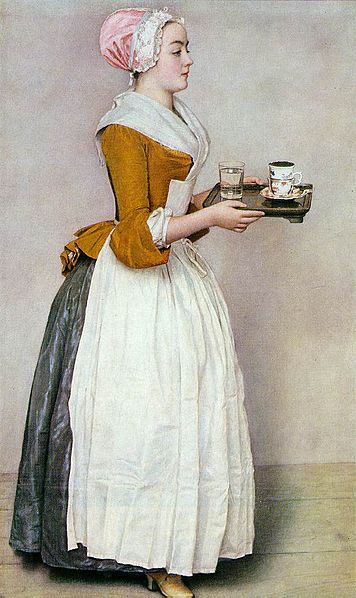 from this 18th century pastel drawing by
Jean-Etienne Liotard, 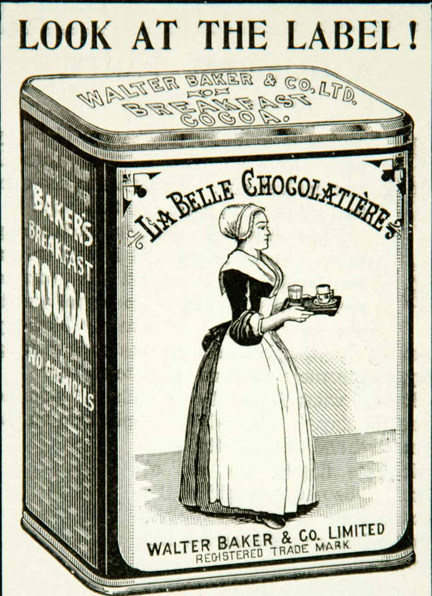 which became part of the image of the American Baker's Chocolate Company in the 1880s. 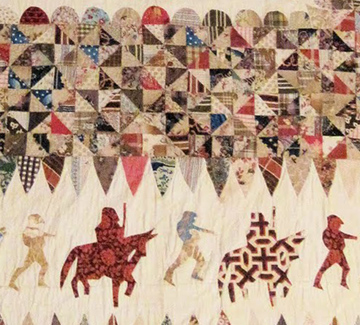 Following a field of triangular patchwork are more human figures, men on horseback alternating with men on foot.

The last border is a variation on the patchwork field.

There seems to be a difference of opinion between Carlisle and Peto. Could it be that the quilt is made of  "textiles much older than the Civil War period." rather than "characteristic of the [Civil War] period." 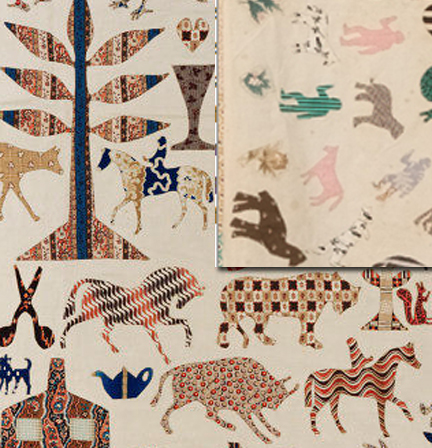 It's foolhardy to try to date fabrics from photographs. The best evidence available from photos is style. This unquilted, finished counterpane has much more in common stylewise with British quilts than American.

I just doubt that it is an American Civil War commemorative.

More next week after I marshal my arguments.

While you marshal your arguments perhaps you will pick up the size of this counterpane. It would help my brain to know approximate size of the applique pieces.

Can't wait to hear more, but in the meantime.....it's FANTASTIC! I love the corners of the applique border, and that outer border with two sizes. is awesome! Thanks for sharing it!

I would agree in dating quilts since most were designs copied from others or from periodicals and products they had in their home.

Go for it! I've always thought the figures were commercial images. Baker's chocolate for sure. Thought the Knight on horseback was King Arthur flour, but it's not. I would bet that knight and the standing knight are/were on some product. Looks English to me.

We had to opportunity to visit this VT Museum a couple of years ago. I'd highly recommend it if you are in the area.

Mimi
Size is an excellent question, but I don't think I have the answer. It looks in the exhibit photos to be full-sized. Peto did not include the size in her book American Quilts & Coverlets.

Fascinating for sure! Sleuthing is a fun part of quilt collecting.

very interesting - would love to hear more. Thanks for the wonderful pictures too!
Hilda

I am looking forward to your arguments. They are always fascinating.