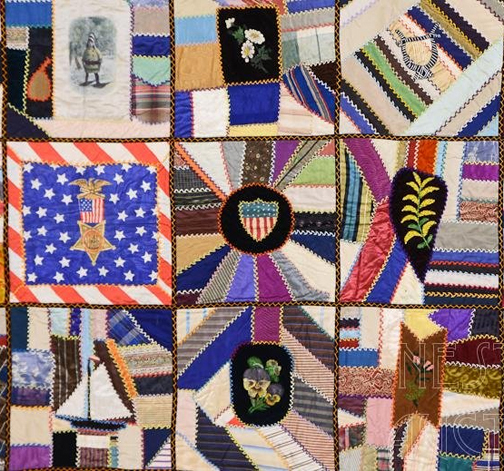 This crazy quilt was pictured on an online auction a month or two ago.
The block in the center of the quilt pictures the ribbon of the G.A.R., the Union veteran's organization. It's on the left in the detail above. 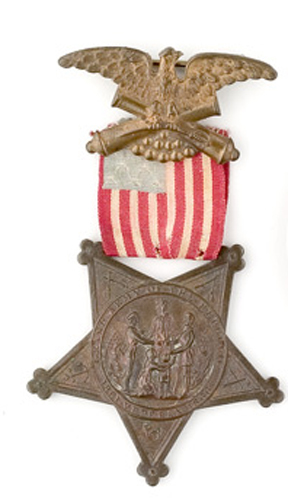 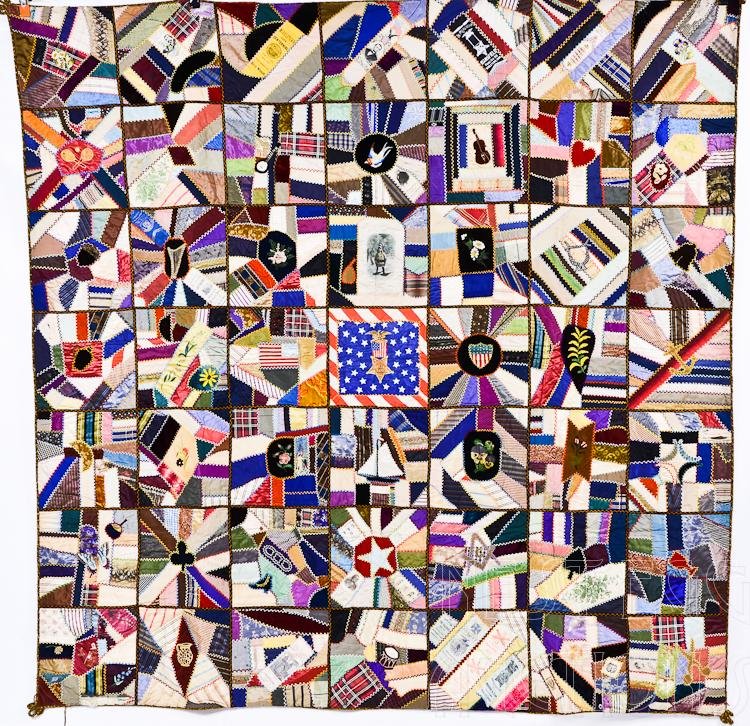 One would have to conclude this was a Civil War commemorative quilt.

There's also a Union shield next to it, but a Union shield alone is probably not enough evidence that the quilt  specifically commemorates the Civil War. 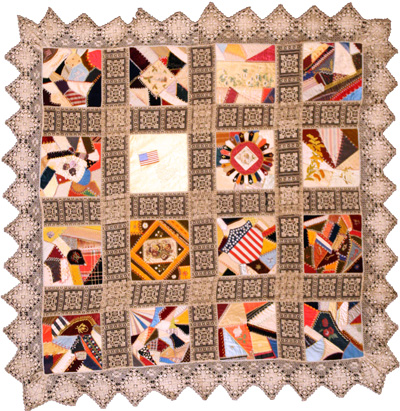 Michigan State University documented an elaborate crazy quilt with a Union shield in one block. I guessed it was a Civil War commemorative, but the quiltmaker Lena Lardner of Niles, Michigan, inked a patriotic inscription that really doesn't mention the war.

"From patriot sire to patriot son, Our flag is handed down, Thro' battles fought and victories won, It holds its old renown, And second only to the cross, Let this bright emblem be!, Thro' earthly gain and earthly loss, Our sign of Liberty! Mother July 31, 1889."

See more about this quilt here at the Quilt Index:
http://www.quiltindex.org/fulldisplay.php?kid=1E-3D-1039 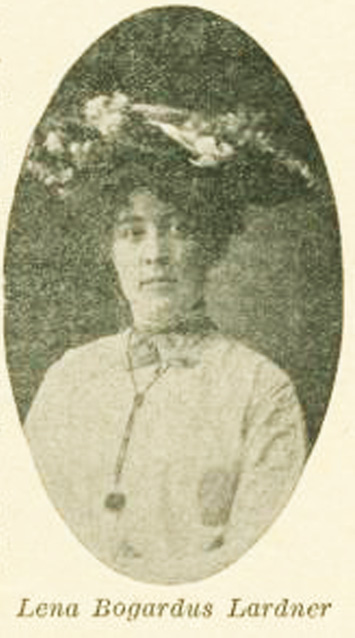 Curiosity aroused, I started poking around for information about Lena Lardner. She had a famous son, sports writer Ring Lardner,so there is much information about the family. Ringgold Wilmer Lardner was born in 1885, youngest of Lena and Henry's six children.

Lena's quilt describes her well.  The Lardners were well-to-do farmers and Henry, Jr. was a bank president. She was a society leader and a pious woman, daughter of an Episcopalian minister (and probably not pleased with Ring's chosen profession or lifestyle). She was also a published author, a poet, and raised her children with a love of literature.

I couldn't find any link to a Civil War solider whom she might have been recalling in this quilt. The county history describes her father Reverend Phillips


"He was thoroughly patriotic during the war and exercised a strong influence in the community by his vigorous support of the cause of the Union. At one time, by a few pertinent questions, he confounded a rash speaker, who in a large out-door assemblage. was proposing an armistice with the Confederates. The speaker attempted to evade for a time, but found it advisable at length to materially modify his ill-timed expressions, and practically collapsed. Mr. Phillips died in 1866. "

Her soldier brother William died of a fever in camp in March, 1862. If Henry Lardner was the "patriot sire" she was thinking of---there is no mention of his service in the War.

So I am thinking the Lardner quilt is a patriotic crazy quilt rather than a Civil War commemorative. Which child  it was made for isn't clear either. Lena had two daughters, Lena and Anna, and four sons William, Henry, Jr., Reginald and Ring.

The family's reasons for naming their youngest Ringgold have confused many. He may have been named after a relative, another Ringgold Lardner born in 1854. People have forgotten the source of that Ring Lardner's name but he may have been named for a hero of the Mexican War, Major Samuel Ringgold who died at the Battle of Palo Alto in 1846. 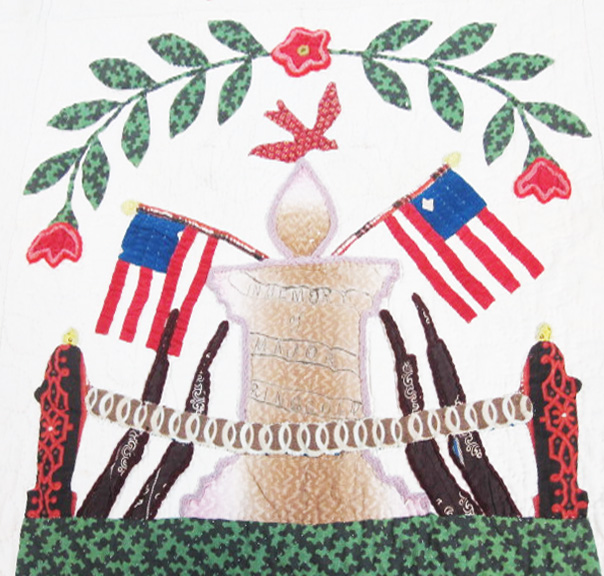 Quilters who love Baltimore Album quilts probably know more about Major Ringgold than anybody but Mexican War scholars. He was memorialized on several quilts in the 1840s. Here's a block from one in the collection of the International Quilt Study Center and Museum inscribed in "Memory of Major Ringgold."

Well, I have to get back to work.

In researching 19th century families, mostly in the Eastern states, I've found several who had a soldier in every war from the Revolutionary War, through the War of 1812 and the Mexican War, and the Civil War. (One example is Jane Smith's son-in-law's family, the Pecks). One branch of my own family had all that, and the Spanish American War, and World Wars I and II. Apparently it was the patriotic thing to do and a continuing tradition to be proud of. Our ideas about war today are a lot.more complicated and our wars now perhaps not so easy to agree with, so times have changed. Perhaps the quilt intends to include all of our wars up to its date and that might have been obvious to some at the time the quilt was made.

I really love crazy quilts, my grandmother used to make simple ones with my grandfather's wool pants. I am working on a wool one, but not too crazy, more blocks with a bit of added pieces.

Truly enjoy you blog. Thanks for the wonderful information.

This quilt is in the collection of the Michigan State University Museum. The sashing and border are handmade lace, the black you see is the background it was photographed on. Lena Lardner was a published poet so her writer son inherited her writing gift. Her grandson Ring Lardner Jr. was a famous black listed Hollywood screen writer of such films as Woman of the Year and Laura.

Thanks for sharing this great information with us,It,s extremely good and very helpful for me.

Barbara, if you visit NYC Brooklyn Museum showing you must also call Laura Fisher and view her storeroom of antique quilts she has collected which are for sale.... if you are interested i will forward my email to you and give you more info..... she has a Civil War quilt dated as such... in relatively fair condition @ $7500! Can't say more here. Susan aka stitchin witch