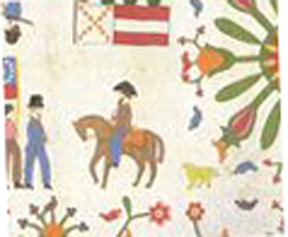 My sister Jane Brackman who writes about the history of dogs asked me about dogs during the Civil War. I have a few pictures of dogs on Civil-War-era quilts which I thought I'd post here.
Above is a detail of a dog on the Confederate quilt by Susan Robb at the Museum at Texas Tech. See the whole quilt here:
http://ethnologyandtextilesmttu.com/tag/civil-war-era/ 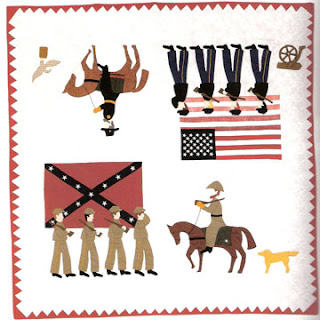 Blue and Gray Battle Quilt
by Nancy Hornback
Nancy put her Confederate soldiers in butternut but kept the yellow dog in her interpretation of Susan Robb's quilt. 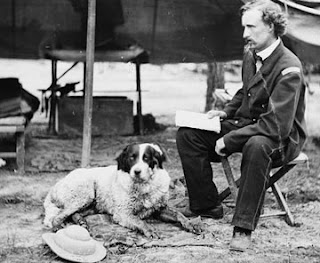 General George Armstrong Custer and dog, picture from the Library of Congress.
These big dogs aren't too familiar to us but my sister says they are Newfoundlands---they used to be colored like this. 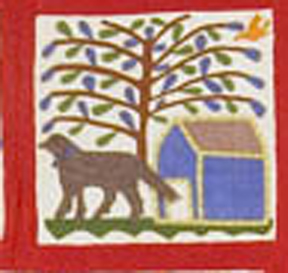 Here's a dog from the Lucinda Honstain's "Reconciliation Quilt" in the collection of the International Quilt Study Center and Museum. When Karla Menaugh and I copied this block for our Civil War sampler War & Pieces many years ago I saw it as a Golden Retriever. But now I bet it was a Newfoundland.
See the Honstain quilt at this link:
http://cdn.firespring.com/images/79f9dec0-07af-4df9-9820-c8ae3ec93fef.png 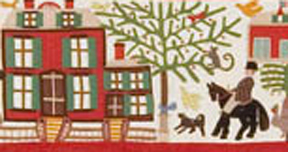 More dogs from the same quilt.
The quilt was made in Brooklyn, New York. 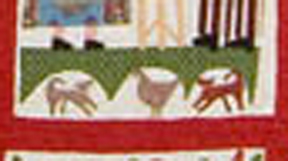 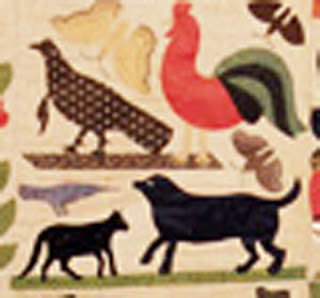 Similar dog on a strip of grass from another New York quilt, this one called the Bird of Paradise Quilt from the Museum of American Folk Art. People are reproducing his quilt now as the Civil War Bride's Quilt---although the connection to the Civil War is not too strong.
Dogs on Civil War Quilts. What's it all mean? Probably nothing more than an image of the domestic life the soldiers left behind as in this Union envelope.
You actually see more cats on these Civil War memorial quilts than dogs. See my post on cats here:
http://barbarabrackman.blogspot.com/2011/03/cats-on-quilts.html 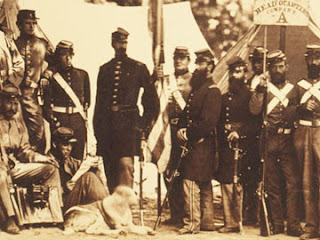 Too bad this guy wiggled so it's hard to see what kind of dog he is. 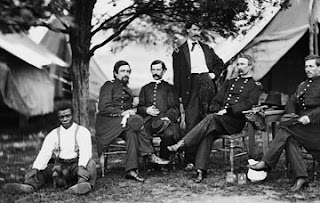 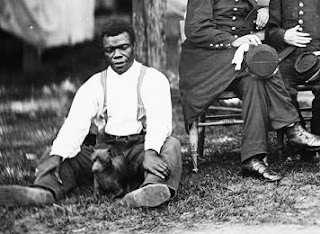 Email ThisBlogThis!Share to TwitterShare to FacebookShare to Pinterest
Labels: dogs

I love dogs and cats, so love incorporating them into my quilts. I had one I started, a fun piece, so figured it was time to finish it. I did the cat on the bird bath from the book, cats on quilts. Love absurd folk art like that.

I didn't know your sister had a dog site, so have her on follow now.

I love how you make every single element in a quilt interesting to read about. Loved this post. I would have noticed the animals but not really paid much attention to them. Now that I read this post, I will be watching for dogs and cats in the quilts for sure!

A post on Friday? What a nice surprise. Love your info about dogs on/in quilts.

The black and white dog on the photo looks like a Wetterhoun, because of the colour and the curly hair.
Have a nice day Merel

Enjoyed this post! Thanks for sharing! Dogs figured prominently in the lives of many Civil War soldiers. The dogs rarely had an official military role, but countless numbers of dogs served as mascots and companions in camp, on the march, and sometimes even in battle. They helped to raise soldiers' spirits at one of the bleakest times in America's history. It is wonderful to see the dogs remembered in soldiers' photos and, on the homefront, in these lovely quilts.