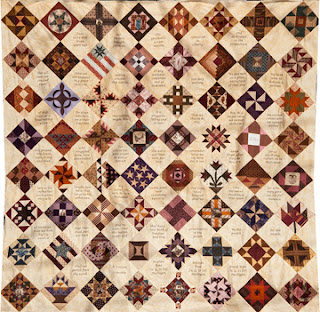 Did you notice LittleQuilts's finished top on our Flickr page? 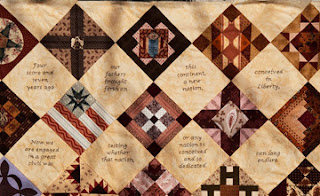 She did all the blocks by hand and hand embroidered the Gettysburg Address in alternate blocks!
She says:
I wanted to make this a true historical memorial quilt commemorating the Civil War. It has been hand-pieced and hand embroidered. It will be hand-quilted. The borders have not been added. It is 95 X 95 inches now without a border. It will be a big quilt. For those of you from other countries, the words are the Gettysburg Address given by Abraham Lincoln to dedicate and consecrate the National Cemetery at Gettysburg, Pennsylvania in 1863. 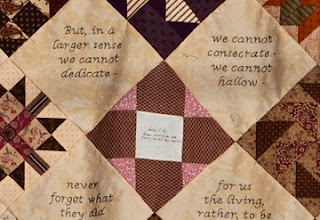 The fourth row down and second from the right is a block that was made in 1863 [the actual block not a copy]. That block reads Joshua T. Day cancer cured by Mrs. Wells January 1863 at West Boxford Ma (Massachusetts).

The last three embroidered squares honor three men who were in my family that fought in the CW. All three came home. One was discharged with a disability. Two were brothers of my great grandmother and one was a first cousin. I had to add 12 more blocks...I also added some antique fabric from inside a china head doll's head."

This project has been good therapy for Dianne who is dealing with an aging parent. Thanks to her for sending a picture.
She's been doing a little research on Joshua Day from West Boxford too.
Posted by Barbara Brackman at 6:00 AM

I was captivated by the photograph of this quilt top and then shocked and surprised as I read on... I was born and raised in West Boxford, MA! I am going to send this link to my parents to see if they know anything about this individual. Wow!

I thought this was a masterpiece when I first saw it - now I'm sure. Thanks for the close up look.

This is an amazing quilt.
Lillian @ lillianscupboard.com

WOW, WOW, WOW. thanks for sharing

If I were to describe this quilt with one word, it would be incredible! I hope you will enter it in some quilt shows so others can see it.

It has been a pleasure to see this quilt develop over the past year.

Congratulations on such a wonderfully executed quilt.

Me and My Stitches said...

Amazing! I don't even know what else to say. WOW!!

Wow! Amazing quilt! Thanks for sharing.

This is so cool! Thanks for sharing it!

This is an incredible example of art and historical commemoration. I am in awe at the skill and creative design involved.

What a fantastic quilt and story to go with it. It will be cherished for many more years to come.

This is truly an amazing quilt! Thanks so much for sharing it!

I imagine you are tickled at how inspiring your project turned out to be. We are all so grateful for all the work you put into it, and it's quilts like this that attest to that!

Wow-what a family treasure. Can't wait to see it quilted and with the border on it.

Wow. Wow. This is amazing

That quilt is amazing, I love how she added the address to the alternate blocks.

Quilts are created for all kinds of reasons, women waiting for husbands to come home from war, making sure a dead child is honored and so many other painful events women endure. I do hope this one gets good documentation so that it can live a long time in history. And bless her for her patience to do such lovely needle work in the middle of being a care giver.

Happy sewing and thanks for sharing this beautiful quilt

Wonderful quilt! I love that she added the Gettysburg Address, how beautifully appropriate... and the personal connections she has make it all the more splendid! Great job!

Thanks so much for sharing your quilt. This is something I would never have thought of to embroidery this on a quilt.
This inspires me to research my family tree.
Lisa in Alabama

Dianne: if you will e-mail me, I have information that you can use regarding Joshua Day.

Absolutely lovely, lovely quilt and I think the Gettysburg Address is simply the most succinct and wonderful speech ever. Thank you so much for sharing the quilt and the family story.

Does Little Quilts have a blog that we can follow? This is exquisite and so profound!

I am a Civil War buff, and this is the most beautiful I have ever seen!!! ❤️