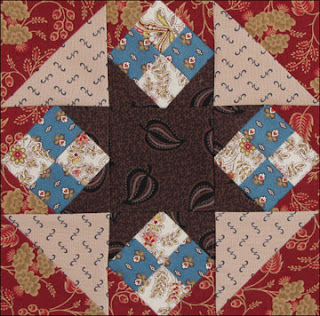 Richmond by Becky Brown
Richmond is a block published about 1915 by the magazine Hearth and Home,
which asked readers to send in patchwork patterns for the state capitols. 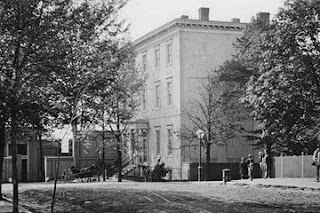 The Confederate White House in Richmond.
The Davises moved into this house in August, 1861.
Varina gave birth to two children here and lost one.
Richmond, Virginia, became the capitol of the Confederacy in the spring of 1861. Jefferson Davis, former U.S. Senator from Mississippi, was inaugurated as President of the Confederate States 150 years ago this week. 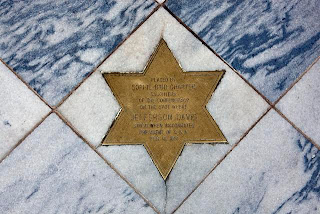 A star on the floor of the statehouse in
Montgomery, Alabama
marks the spot where Davis was inaugurated. 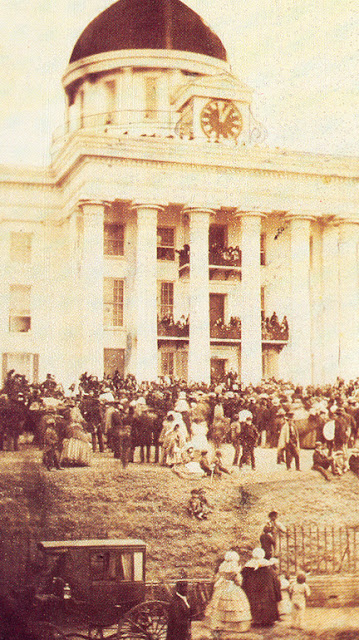 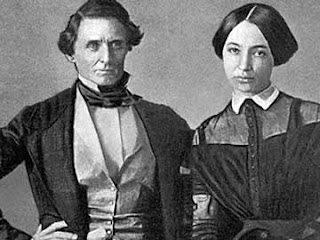 The Davis's photo at their marriage in 1845. Varina was 19.
Varina Howell Davis, his 34-year-old wife, became First Lady of the Confederacy. Varina had spent the early years of her marriage in Washington as the wife of an important Senator. When they left Washington, their family included three young children--- Margaret, Jefferson and Joseph.

Varina Davis's wit and style is reflected in the diary of her close friend Mary Chesnut.


May 19, 1861-  [at the first capitol in Montgomery, Alabama]. Drove out with Mrs. Davis. She finds playing Mrs. President of this small confederacy slow work, after leaving friends...in Washington. I do not blame her. The wrench has been awful with us all, but we don't mean to be turned into pillars of salt [in looking back.]
May 20th, 1861.—Lunched, at Mrs. Davis's. Everything nice to eat, and I was ravenous... Mrs. Davis was as nice as the luncheon. When she is in the mood, I do not know so pleasant a person. She is awfully clever, always." 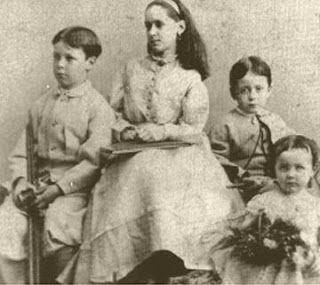 The surviving Davis children after the War.
Jefferson, Margaret, William and baby Varina (Winnie)
Four years of War changed the lively young wife. Like her Union counterpart Mary Lincoln Varina Davis lost a child during the War. In her memoir she recalled the day in 1864:
“I left my children quite well, playing in my room, and had just uncovered my [sewing] basket in [’s] office when a servant came in for me. The most beautiful and brightest of my children, Joseph Emory, had in play climbed over the connecting angle of the banister and fallen to the brick pavement below. He died a few minutes after we reached his side."
She gave birth to her youngest that year and wrote to Mary Chesnut in April, 1864.
"Do come to me, and see how we get on. I shall have a spare room by the time you arrive, indifferently furnished, but, oh, so affectionately placed at your service. You will receive such a loving welcome. One perfect bliss have I. The baby, who grows fat and is smiling always, is christened, and not old enough to develop the world's vices or to be snubbed by it. The name so long delayed is Varina Anne. My name is a heritage of woe." 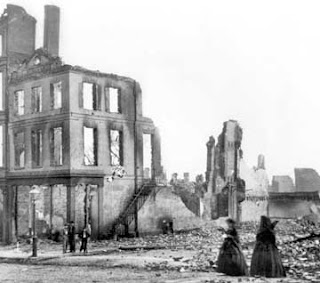 Richmond in 1865
Among other names, this week's block was called Butterfly by the Chicago Tribune's quilt columnist in the 1930s. The name is particularly appropriate as Varina Davis herself embroidered a butterfly in the center of a silk quilt she made about 1870. 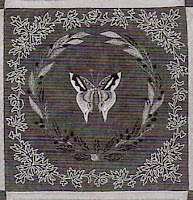 For more information about Varina Davis's quilt see page 111 of my book Quilts From the Civil War.
We can remember Varina Davis and her heritage of woe with Richmond. 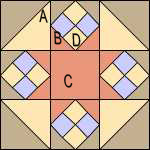 Cutting Instructions for an 8" finished block 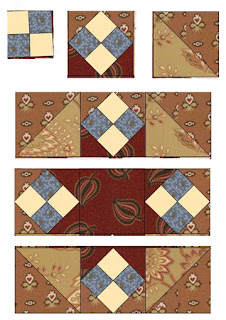 A suggestion from Karen D.:
Karen sent a note on Sunday Feb 6th. "I made the block this morning and love it but I think there is a cutting change - B - 2 1/8" squares instead of 2 1/4" squares. I drew it out on EQ and it also stated the rotary cutting for B to be 2 1/8". I did this because the four patch section ended up too big."
When we originally drew the block in EQ it did say 2-1/8" but the test block turned out to be too small, so we added the 1/8" inch. The problem here is that my criteria for choosing a block is whether it is an interesting Civil War block, not whether it fits nicely into an 8" format---four patches would fit best. If this is the kind of thing that drives you crazy, redraft the blocks to 12" (which fits both a four-patch and a nine-patch format)---but what of the blocks that are divided by 5 or 7??? Ohhh dear.
Read Varina Davis's 1890 memoir of her husband's life Jefferson Davis Ex-President of the Confederate States of by clicking here at Google Books.
http://books.google.com/books?id=GHE4AAAAMAAJ&dq=memoir+varina+davis&source=gbs_navlinks_s
Read the 1905 version Mary Chesnut's diary Diary From Dixie online at the University of North Carolina's site Documenting the American South.
http://docsouth.unc.edu/southlit/chesnut/menu.html
But once you start reading Mary Chesnut you have to read the uncut version: C. Vann Woodward's edition called Mary Chesnut's Civil War. 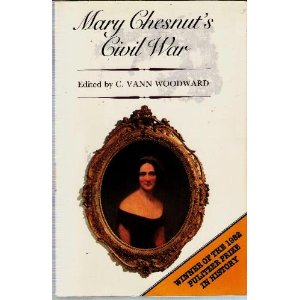 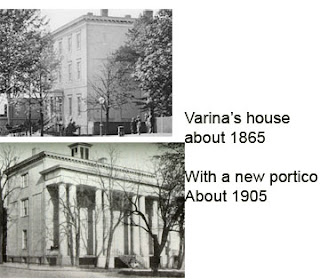 Varina's wartime home now houses
the Museum of the Confederacy
See more about Quilts from the Civil War by clicking here:
http://www.ctpub.com/productdetails.cfm?PC=1685
Posted by Barbara Brackman at 6:00 AM

Thank you again for a wonderful block, so appropriate for the anniversary later this week, and Varina's story.

Mary Chestnut's Diary is very interesting reading. It provides a completely different perspective of the Civil War. Thank you for the block and the history lesson. I love the combination.

Thanks for block 6. I just caught up with the other blocks and can't wait to start on this one. Love this block. Thanks again - Hugs Nat

Thank you so much for your kindness in making these blocks available. I am really enjoying making them as well as reading the history. Was wondering if it would be possible to make the directions for the blocks a seperate link so they would be easier to print out?

I love getting up on Saturday morning and finding the new block! Thanks so much, Barbara, for posting these.

Thank you, I am enjoying waking up on Saturday morning to see what the block we are going to be working on . I love the four patch with the stars.

Another beautifull block, thank you!

Oh, I like that one! I might get a bit of blue in with all this brown and red/pink! Thank you.

I think there should be 8 light D squares too?
Thanks for this fun BOW Barbara!

A wonderful block ! Though living in Wisconsin, I grew up in Virginia & miss all the history at my fingertips. Will be revisiting Mary Chesnut's epic diary today.

thanks for this beautiful block,have a nice sunday,i am looking forward to each saturday,susi

Yea for another good block #1654 in Blockbase. Playing catch up today. Printed it off and ready to sew next week.

My husband is from Richmond and is excited to see a block with his "home" city's name...

Mine is done and I believe this is my favorite so far. Thanks!

I finished mine and I like the block. I have posted the block along with a how-to on my blog.

Thanks for the blocks! I really look forward to each Saturday, seeing what you have come up with and such interesting history to go along with it. Love it! My blocks are far from perfect, but I still enjoy the process.

Just got mine done.

Really enjoyed doing this block, it was a challenge and EQ was a big help when figuring out measurements etc. I actually love this process, makes the completion all the more satisfying, even if it drives me crazy at the time LOL, keep then coming!!!!

I make a scrap block of these which are new to me before using my cherished Moda fabrics.
The challenge on this one is making the side units match the center in size without carving off the points.
I found that I could construct the patches with the 4 patch on point using a deeper seam allowance than my usual scant 1/4", then revert to the usual needle setting for the triangle/squares and finishing the rows.
Its not quite perfect [frustating!] but it is possible to fiddle with this and achieve a neat block that measures 8 1/2".
Too time-consuming to fuss with multiple Richomnds, but an interesting block and a good history review.

thank you so much for these...i am slowly copying them but can't start for a while as i have broken my arm...dzintra